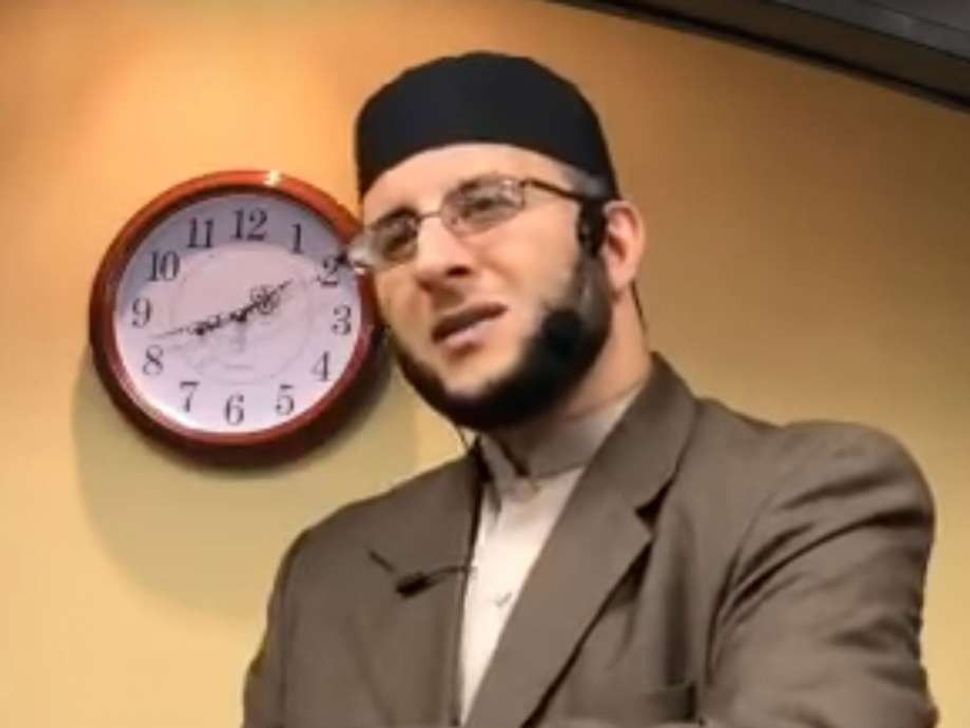 In a Dec. 8 sermon, Houston Imam Raed Al-Rousan’s detailed his interpretation of the history of Israel and Palestine, saying Palestine is not the country of Jewish people and that one day Muslims will fight and defeat Jews there. Image by youtube

(JTA) — A Houston imam walked back a sermon in which he called for Muslims to kill Jews without specifically apologizing for his comments.

Imam Raed Saleh Al-Rousan of Houston’s Tajweed Institute earlier this month delivered what he called an “impassioned sermon,” according to a statement about the speech issued on Wednesday.

“I unequivocally affirm and uphold the dignity, sanctity and value of all human life, including – of course – people of the Jewish faith,” Al-Rousan said in the statement. “I must also state in no uncertain terms that I am absolutely and completely opposed to and disgusted by all forms of terrorism, all terrorists, and I oppose anyone who would commit, call for, or threaten violence against civilians.  This is why as a person of faith and a religious leader, that I am mortified that an impassioned sermon I gave in light of President Trump’s Jerusalem declaration is being seen as a call for the very things I despise.”

Al-Rousan had delivered his inflammatory speech on Dec. 8, two days after President Trump announced the United States’ recognition of Jerusalem as Israel’s capital.

“Judgment Day will not come until the Muslims fight the Jews. The Muslims will kill the Jews,” Al-Rousan said.

The imam also asserted in his speech that Jews “killed the Prophets and the Messengers of Allah.” He accused Britain of bringing Jews to Palestine, adding “So do not tell me that Palestine is the country of the Jewish people. No!”

The local Anti-Defamation League said in a statement that the statement issued by the imam indicates that “he doesn’t fully understand the ramifications of his sermon.”

“We would like to see Imam Al-Rousan unequivocally apologize to the Jewish community for his highly inflammatory sermon and through future actions, demonstrate he is committed to understanding why the sermon was an incitement to violence,” the ADL said.

A statement issued by leaders of Houston’s Muslim community said the imam’s sermon “was deeply problematic and does not represent the views or sentiments of the Houston Muslim community.”