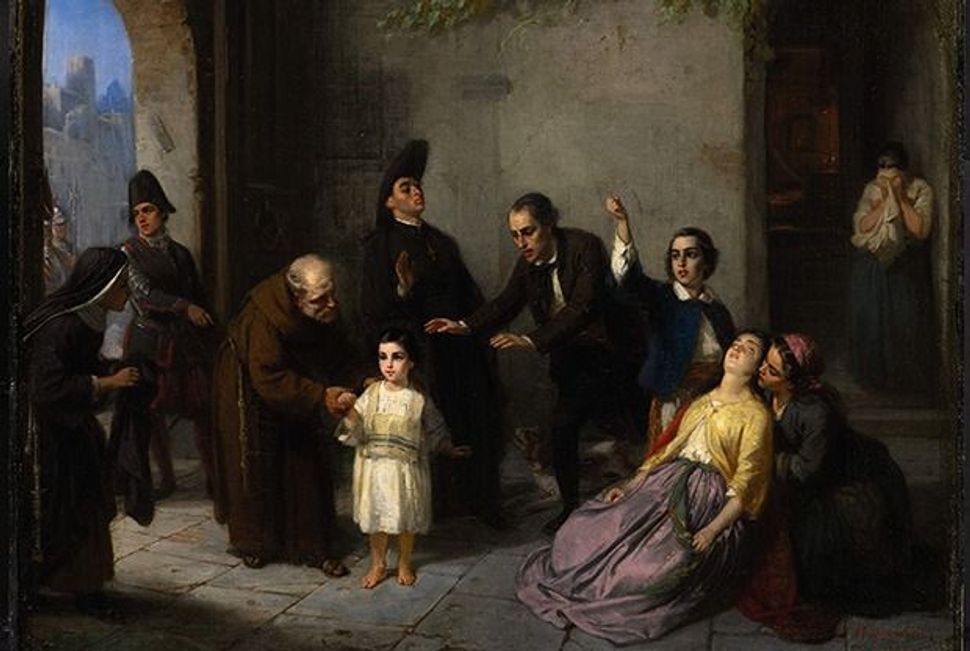 “The Kidnapping of Edgardo Mortara,” a painting by Moritz Daniel Oppenheim. Image by Jüdisches Museum der Stadt Frankfurt am Main

The prominent Catholic magazine First Things published a book review in its February issue that defended Pope Pius IX’s approval of the kidnapping of a 19th-century Jewish boy who was secretly baptized by his Christian maid.

In 1858 in Bologna, an Italian city then directly ruled by the Pope, a six-year-old Jewish boy named Edgardo Mortara was forcibly taken from his parents by military police when it was discovered that his nanny had administered Christian rites on him as a baby. Because of his secret baptism, Edgardo was officially classified as a Christian, and therefore forbidden from living with Jews.

Edgardo was raised as a Catholic, and his education was personally overseen by Pope Pius, who repeatedly refused on theological grounds to return the boy to his parents.

Father Romanus Cessario, a Catholic priest, wrote in the magazine that this was the correct decision.

“The requirement that all legitimately baptized children receive a Catholic education was not arbitrary,” he wrote. “Since baptism causes birth into new life in Christ, children require instruction about this form of new life.”

Cessario intimated that God would have approved of the kidnapping. “Prior to the arrival of the papal gendarme at his parents’ home, Edgardo Mortara was an anonymous Catholic,” he wrote. “In his case, divine Providence kindly arranged for his being introduced into a regular Christian life.”

The article was heavily criticized by conservative Christian commentators.

“The taking of the child by force from his parents and family was an abomination and defending it is an embarrassment,” Princeton University professor Robert P. George, a prominent Catholic intellectual, wrote on Facebook.

“All the theological syllogisms in the world cannot cover the moral crime committed by the Pope against that powerless Jewish family,” Orthodox Christian author Rod Dreher wrote in The American Conservative. “The kind of argument that Father Cessario makes in this essay may make emotional sense to men who have never fathered a child. Nevertheless, it is grotesque.”

Steven Spielberg has been preparing a movie about the Mortara case for the past few years.