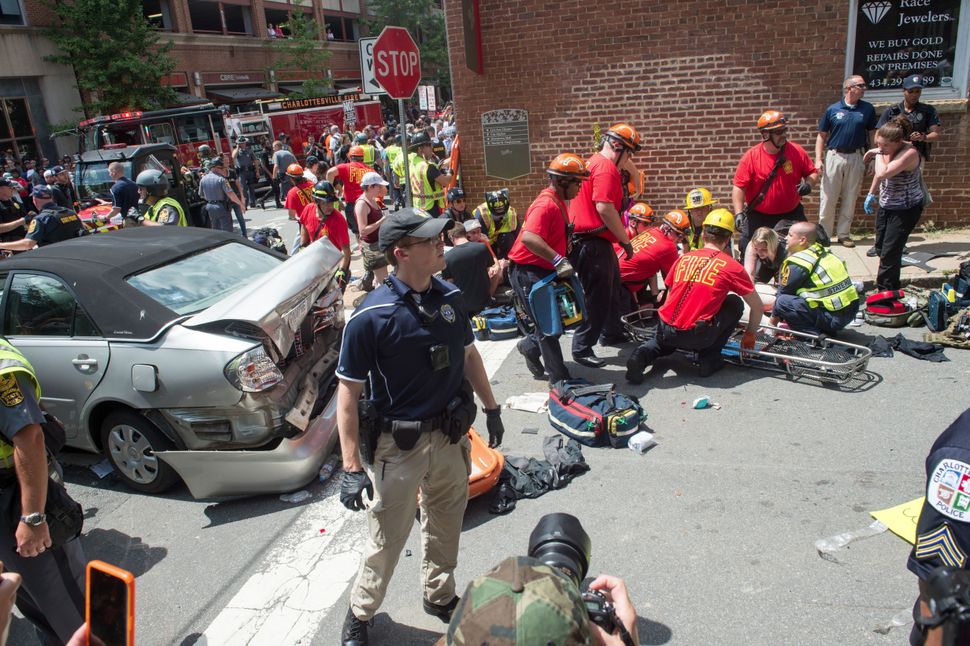 The aftermath of a deadly car-ramming attack on protesters opposing a white supremacist rally. Image by Getty Images

Murders committed by American white supremacists more than doubled in 2017 over the previous year, according to a new Anti-Defamation League report.

White supremacists were responsible for 18 of the total 34 extremist-related killings in the country, the ADL repoted.

The report, “Murder and Extremism in the United States in 2017,” was released Wednesday by the ADL’s Center of Extremism. According to the numbers, 2017 overall deats were significantly less than in 2015 and 2016, but still higher than average.

ADL’s new report, Murder and Extremism in the United States in 2017, reveals that overall deaths were significantly less than in 2015 or 2016—largely due to the absence of major shooting sprees. However, they were still higher than average.https://t.co/vKybMMdqCL pic.twitter.com/AvqtEHEyJ4

The white supremacist murders included several killings linked to the “alt right,” the online reactionary subculture that burst into national media over the last few years, particularly after latching onto the campaign of Donald Trump.

The “alt-right” has breathed new energy into older white nationalist movments. “Alt-right” imagery and figures featured prominently at the explosive Charlottesville, Virginia rally that devolved into violence and led to the killing of a counter protestor.

Despite white supremacists being behind the most violence, other extremist groups are also worth noting. An Islamic extremist committed the single deadliest incident in 2017 — the New York City bike path attack, which killed eight people. The ADL also notes that 2017 was the second year in a row in which black nationalists have committed murders, which the group warns could be “the possibility of an emerging problem.”