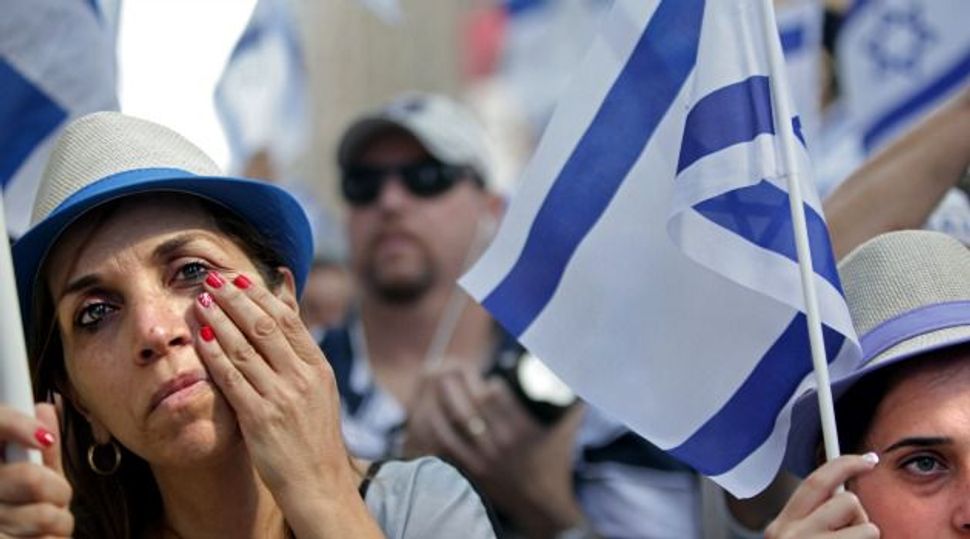 A pro-Israel rally in New York Image by getty images

A new Pew Research Center survey published Tuesday highlighted what Israelis and pro-Israel activists in the U.S. have feared for years — Israel is becoming a partisan issue, and the gap between Democrats’ and Republicans’ opinions of Israel is only growing.

According to Pew, the partisan divide on Israel has reached a record level, with 79% of Republicans saying they sympathize with Israel more than the Palestinians, compared to only 27% of Democrats. Independents fell somewhere in the middle, with 42% of them expressing more sympathy to Israel.

Here are some key takeaways from the Pew report:

It’s Not A New Trend, But It’s Getting Worse:

Democrats have been growing less sympathetic to Israel since the turn of the century, just as Republicans began warming up to Israel. These trends shot up in recent years, plunging Democratic support to an all-time low, while seeing Republican sympathy grow rapidly during the Obama years.

Evangelicals Are A Driving Force, But Others Contribute Too:

White evangelicals are by far the most sympathetic religious group toward Israel, with 78% of them expressing more support for Israel with only 5% giving more support to the Palestinians. Evangelicals’ strong identification with the Republican Party may account for part of that shift. On the other hand, religiously unaffiliated individuals, who mostly tend to align with Democrats, are the least pro-Israel religious group, with 26% expressing more sympathy to Israel and 29% to the Palestinian side.

Liberal Democrats Are Pulling Away, But So Are Moderates And Conservatives:

Progressives and liberals on the Democratic side have always held a more skeptical view toward Israel and were stronger supporters of an evenhanded policy toward the conflict. This trend has continued, with only 19% of them giving more support to Israel. But it would be wrong to attribute Israel’s problem only to the liberal wing of the Democratic party. Among those identifying as moderate or conservative Democrats, support for Israel has plunged dramatically in the past year: 53% of that group gave more support to Israel in 2015, compared to only 35% now. The inauguration of President Trump seems to be a factor: 46% of Democrats think that Trump — whom they overwhelmingly oppose — favors Israel too much, while only 21% believe that he “strikes the right balance” between Israel and the Palestinians.

Israel Is Losing, But the Palestinians Aren’t Winning:

Why Don’t We Feel This Divide In American Politics?

With such a partisan divide, how do pro-Israel resolutions and foreign aid budget bills get approved overwhelmingly in Congress? How do both parties boast a pro-Israel platform? The answer is in the divide between grassroots and leadership. Democratic leadership remains strongly sympathetic to Israel — a result of years of work with pro-Israel activists and of deep ties with players on the ground. The Democratic grassroots: not so much. But there is a warning here to the pro-Israel crowd: grassroots activists often grow up to become decision-making politicians.

Who Should Worry About This?

Mainly the traditional pro-Israel groups like AIPAC, which have built their power on the idea of Israel being a bipartisan cause in American politics. If it is no longer so, such groups will lose influence, making room in the pro-Israel scene for more partisan players such as the Zionist Organization of America and the evangelical Christians United for Israel.