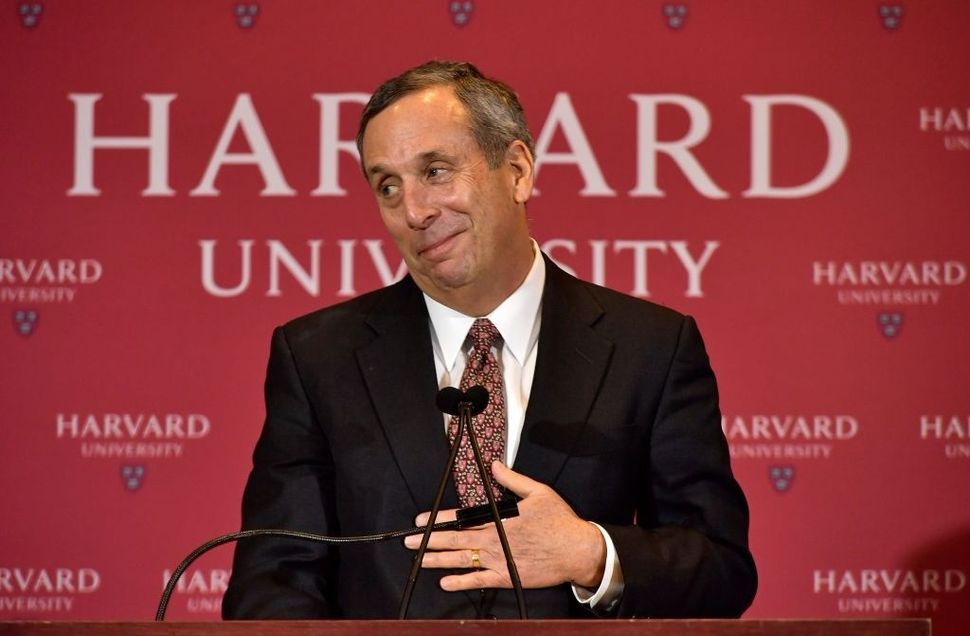 Lawrence Bacow speaks as he is introduced as Harvard University’s 29th president during a news conference on February 11, 2018 in Cambridge, Massachusetts. The University’s current president, Drew Gilpin Faust, will step down from her post in June 2018. Image by Paul Marotta/Getty Images

(JTA) — Lawrence Bacow has been tapped to be the next president of Harvard University.

The university made the announcement in a statement issued on Sunday, The Boston Globe reported.

Bacow, a lawyer and economist, is the former longtime president of Tufts University.  He will replace Drew Gilpin Faust, who is retiring in June. Bacow had served on the search committee that hired Faust, according to the Globe.

An expert in environmental policy, Bacow, 66, is originally from Pontiac, Michigan. He received his undergraduate degree from MIT and has a law degree and PhD from Harvard. He was president of Tufts from 2001 to 2011.  Prior to leading Tufts, he was chancellor of MIT, where he also spent 24 years on the faculty.

Bacow most recently served three years at the Harvard Graduate School of Education and is currently a leader-in-residence at the Harvard Kennedy School. He has been a member of the Harvard Corporation, the university’s governing board, since 2011. He also serves on the boards of Liquidnet, Loews Corp., Henry Schein, Inc. and TIAA-CREF, the Globe reported citing Tufts.

At Tufts he oversaw a fundraising campaign that raised $1.2 billion and is credited with strengthening the university’s ties to the surrounding community, according to the newspaper.