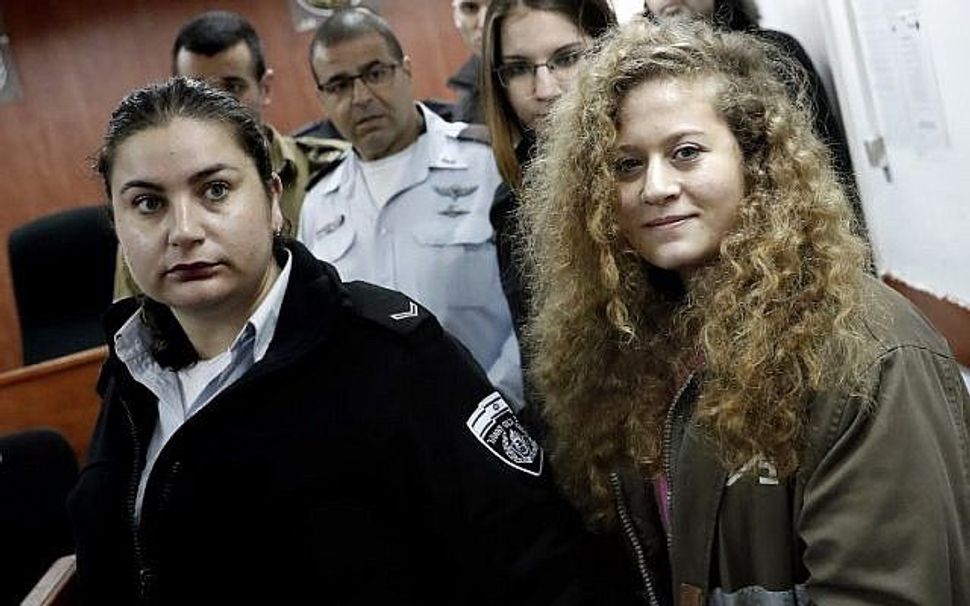 Palestinian Ahmed Tamimi, right, arrives for her trial in the Israeli military court in the West Bank.

JERUSALEM (JTA) — A trial began in military court for the Palestinian teen arrested in part for slapping and harassing Israeli soldiers standing guard in a West Bank Palestinian village.

Ahed Tamimi, 17, arrived in Ofer military court on Tuesday morning. She had been ordered held in prison until the end of legal proceedings against her.

The judge closed the courtroom, citing the defendant’s status as a minor, ordering out journalists and diplomats who had been present to observe the trial. Family members were allowed to remain. The teen’s attorney argued to keep the trial, which has peaked international interest, open.

Ahed has been charged with 12 counts including aggravated assault, hindering a soldier in the line of duty, incitement, threatening a soldier’s life and rock throwing. The indictment covers six incidents in recent months in which she was involved in altercations with Israeli soldiers, including the Dec. 15 slapping incident that was captured on video and went viral on social media.

“In the US, we know all too well what it’s like to be oppressed simply because you exist, because you refuse to give up your fight for freedom,” read the letter circulated by the civil rights organization Dream Defenders and signed by Danny Glover, Rosario Dawson, Angela Davis, Alice Walker and Michael Bennett.

Ahed’s mother, Nariman, also faces trial over her involvement in the slapping  incident, in which she films Ahed with a cellphone camera calling on her fellow Palestinians to stab Israelis, throw rocks at them and offer themselves as suicide bombers in order to “liberate Palestine.” Nariman Tamimi also was charged with incitement to terrorism on Facebook for posting the video of the incident.