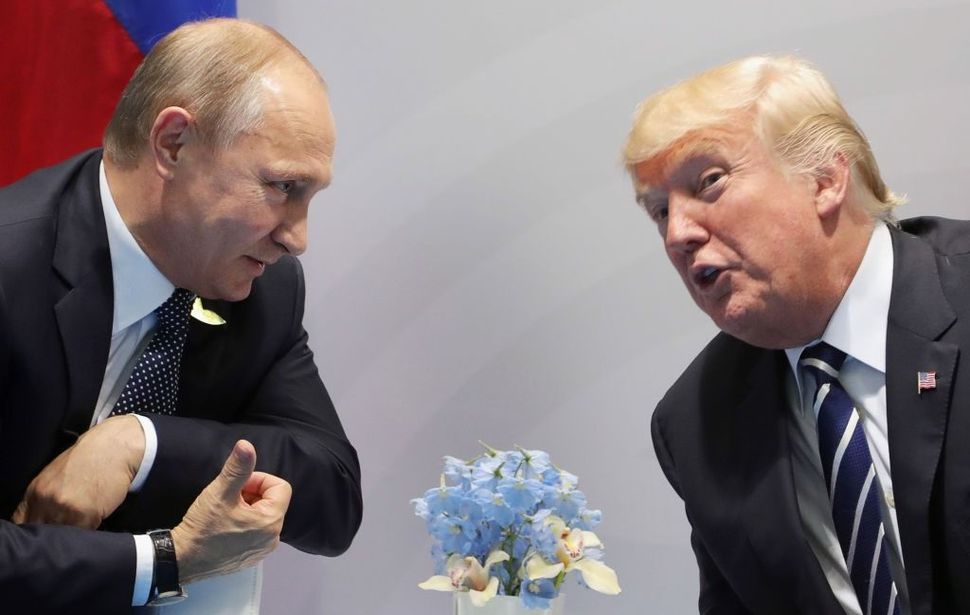 US President Donald Trump and Russian President Vladimir Putin speaks during their meeting on the sidelines of the G20 Summit in Hamburg, Germany, on July 7, 2017. Image by MIKHAIL KLIMENTIEV/AFP/Getty Images

“President Putin noted that he would meet with Palestinian Authority President Mahmoud Abbas later today, and President Trump said that now is the time to work toward an enduring peace agreement,” the White House said in a statement Monday describing a phone call between the two leaders.

Trump told an Israeli newspaper last week he was not confident that either the Israelis or the Palestinians are ready for peace. The Palestinians walked away in December from U.S.-led attempts to revive the peace talks when Trump recognized Jerusalem as Israel’s capital.

Nonetheless, Trump’s team seeking to revive the talks, led by his son-in-law Jared Kushner, has not flagged in attempts to create the conditions that would lead back to negotiations. The top negotiator, Jason Greenblatt, has decried the continuing economic crisis in the Gaza Strip. While principally blaming Gaza’s Hamas rulers for the crisis, Greenblatt has also encouraged Israel and Egypt to ease the entry of goods into Gaza.

There were other signs that despite Trump’s tough talk, his administration was committed to flexibility as a means of getting the talks back on track.

The State Department budget released this week notably did not include cuts in assistance that the Trump administration had warned were coming to countries that voted against the United States in a U.N. General Assembly resolution last month condemning Trump’s recognition of Jerusalem, the Daily Beast reported.

The budget also rolled back provisions in place since 2011 that required the president to shutter the Palestine Liberation Organization office in Washington if the PLO seeks statehood recognition outside the parameters of negotiations. In a passage first noted by Lara Friedman, the president of the Foundation for Middle East Peace, a group that advocates for the two-state solution, the Trump administration will continue to allow the office to remain open if it deems doing so is in the U.S. national security interest.