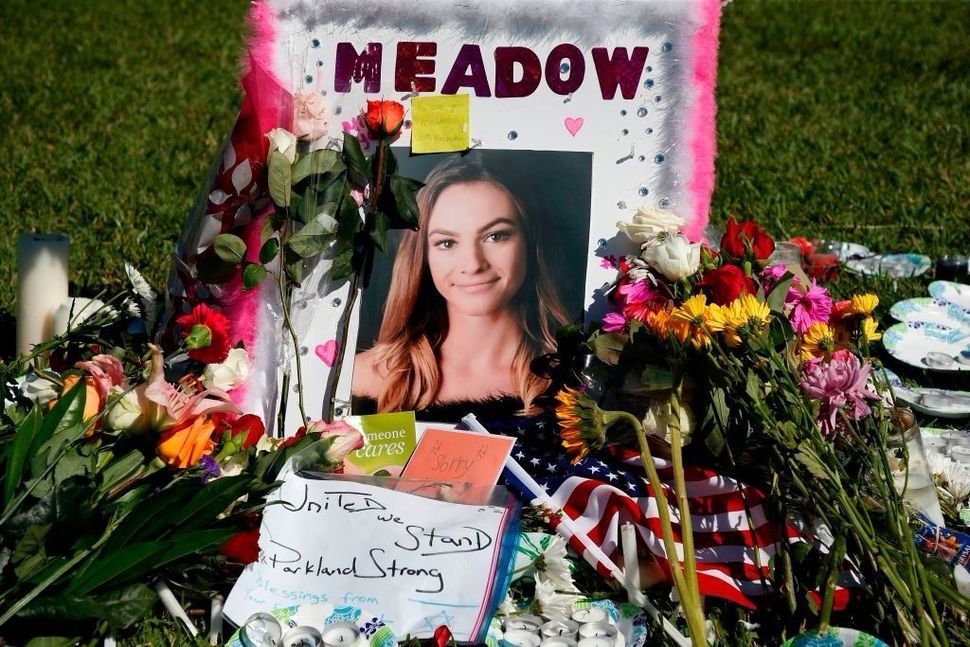 A memorial for Meadow Pollack, one of the victims of the Marjory Stoneman Douglas High School shooting, sits in a park in Parkland, Florida on February 16, 2018. Image by RHONA WISE/AFP/Getty Images

(JTA) — More than 1,000 mourners gathered at a Parkland, Florida synagogue for the funeral of Meadow Pollack, one of the 17 students and staff killed in Wednesday’s school shooting.

“You killed my kid. ‘My kid is dead’ goes through my head all day and all night. I keep hearing it over and over,” her father Andrew Pollack said at Friday’s funeral at Temple Kol Tikvah that also was attended by Florida Gov. Rick Scott and U.S. Reps. Ted Deutch and Debbie Wasserman Schultz, the Florida Sun-Sentinel reported. “I have always been able to protect my family. Our kids should be safe but my princess wasn’t safe.”

Meadow Pollack was 18, and a senior at Marjory Stoneman Douglas High School in Parkland, where 19-year-old gunman Nikolas Cruz opened fire on Wednesday on his former classmates.

Rabbi Bradd Boxman called on those who were present to do an act of kindness in Meadow’s memory. “We must carry Meadow’s love forward and not let it die in a pine wood box,” Boxman said, according to the Associated Press.

Pollack’s funeral came shortly after the first service for a victim, Alyssa Alhadeff, they were both buried at the Star of David Cemetery.