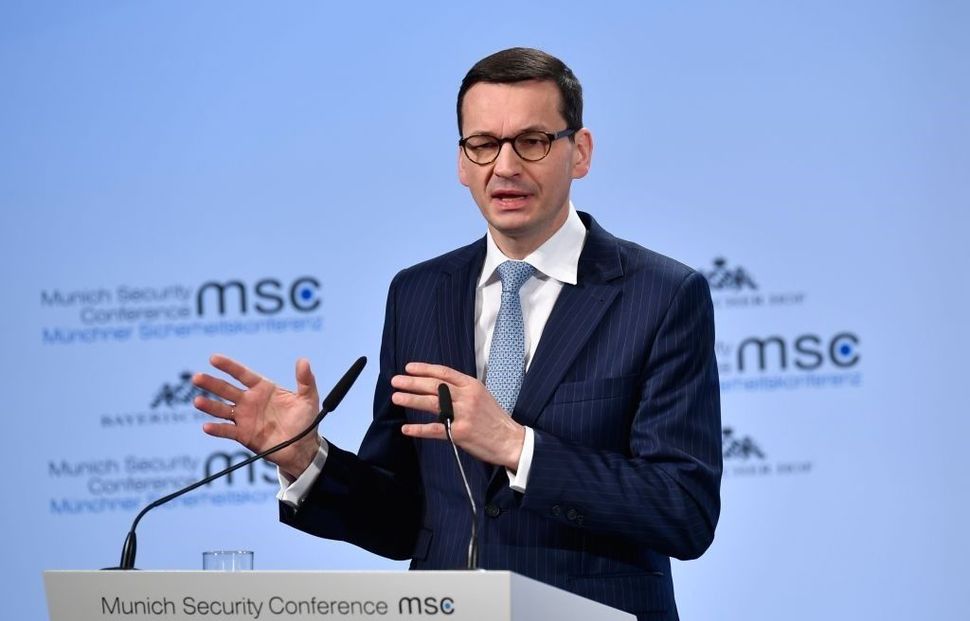 (JTA) — The Polish prime minister’s comments that there were “Jewish perpetrators” in the Holocaust was “a sincere call for open discussion of crimes committed against Jews during the Holocaust, regardless of the nationality of those involved in each crime,” the government said in a clarification.

The clarification statement was issued on Sunday morning, hours after Israeli Prime Minister Benjamin Netanyahu released a statement saying that Prime Minister Mateusz Morawiecki’s statements during an interview with an Israeli journalist were “outrageous.”

The comments continue the saga of the Holocaust law passed by the Polish legislature and signed by the country’s president earlier this month. It criminalizes claims that the Polish nation or state are responsible for Nazi crimes.

The comments made on Saturday “were by no means intended to deny the Holocaust, or charge the Jewish victims of the Holocaust with responsibility for what was a Nazi German perpetrated genocide,” the statement also said, adding that Poland “wants to continue dialogue with Israel in the spirit of truth and mutual trust.”

Netanyahu spoke directly with Morawiecki later on Sunday, his office said in a statement. Netanyahu reportedly told his Polish counterpart that his remarks were unacceptable and that there was no basis for comparing the actions of Poles during the Holocaust to those of Jews. Netanyahu also pointed out that the goal of the Holocaust was to destroy the Jewish people and that all Jews were under sentence of death.

Morawiecki added fuel to the fire on Saturday evening, visiting the grave in Munich of Polish fighters who collaborated with the Nazis during World War II, as part of the underground military unit called the Holy Cross Mountains Brigade. The Polish prime minister laid a wreath at the site.

On Sunday, the Polish Embassy in Tel Aviv was vandalized with swastikas and anti-Polish slogans.