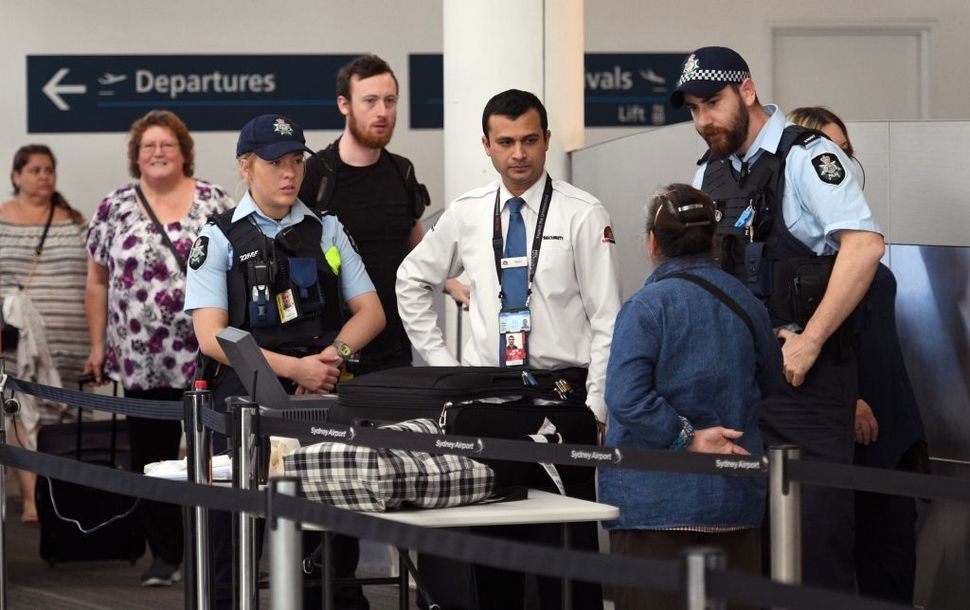 Police help screen passengers at Sydney Airport on July 30, 2017. Australia has foiled an Islamist-inspired ‘terrorist plot’ to bring down an airplane with an improvised explosive, authorities said. Image by WILLIAM WEST/AFP/Getty Images

(JTA) — The Israeli army said it provided intelligence that prevented a plot by the Islamic State to bomb an Australian flight in August.

An unnamed senior army officer said Wednesday that the Military Intelligence Unit 8200 had thwarted the planned attack, according to The Times of Israel.

“The unit provided exclusive intelligence that led to the prevention of an air attack by the Islamic State in 2017 in Australia,” the officer said. “The foiling of the attack saved dozens of innocent lives and proved Unit 8200’s position as a major player in the intelligence fight against the Islamic State.”

In August, Australia arrested two men suspected of trying to carry out an Islamic State plot to place an explosive device on an Etihad Airways flight leaving from Sydney. At the time, Australian police called the attempted attack one of “the most sophisticated plots that has ever been attempted on Australian soil,” according to The New York Times.

“This is just one of the dozens of terrorist attacks that we have stopped around the world,” he said, according to The Times of Israel. “[The intelligence services] deserve all the support we can give, not only for protecting the citizens of Israel, but for protecting people all over the world.”