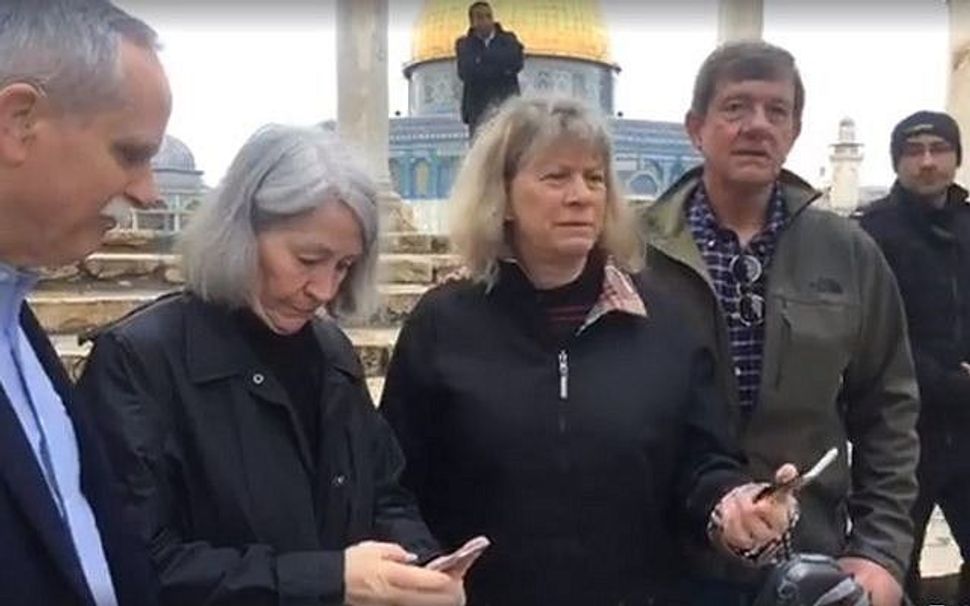 From L to R: US Congressman David McKinley, his wife Mary Gerkin, Jean Tipton and Congressman Scott Tipton visit the Temple Mount in Jerusalem on February 22, 2018. Image by Facebook

JERUSALEM (JTA) — Two U.S. congressmen were questioned by police after they removed an olive branch from the Temple Mount compound.

Reps. Scott Tipton of Colorado and David McKinley of West Virginia, both Republicans, visited the site holy to Muslims and Jews on Thursday morning. They are part of a weeklong fact-finding mission hosted by Proclaiming Justice to the Nations, a pro-Israel evangelical group, and Jaffe Strategies, which runs a pro-Israel lobby group.

The Islamic Waqf guard that was accompanying the congressmen complained to the Israel Police escort about the action. It is forbidden to remove objects from the site.

Police officers stopped the congressmen and asked if they had taken an object from the Temple Mount. They were not detained, according to the police.

The congressmen later had a scheduled meeting with Prime Minister Benjamin Netanyahu, during which they said they would bring up their experience at the site.

Also Wednesday, Netanyahu met with a delegation of Republican senators led by Sen. Lindsey Graham of South Carolina. Netanyahu briefed the group on Iran’s attempts to establish a military presence in Syria and Israel’s determination to stop it, a statement from the Prime Minister’s Office said.