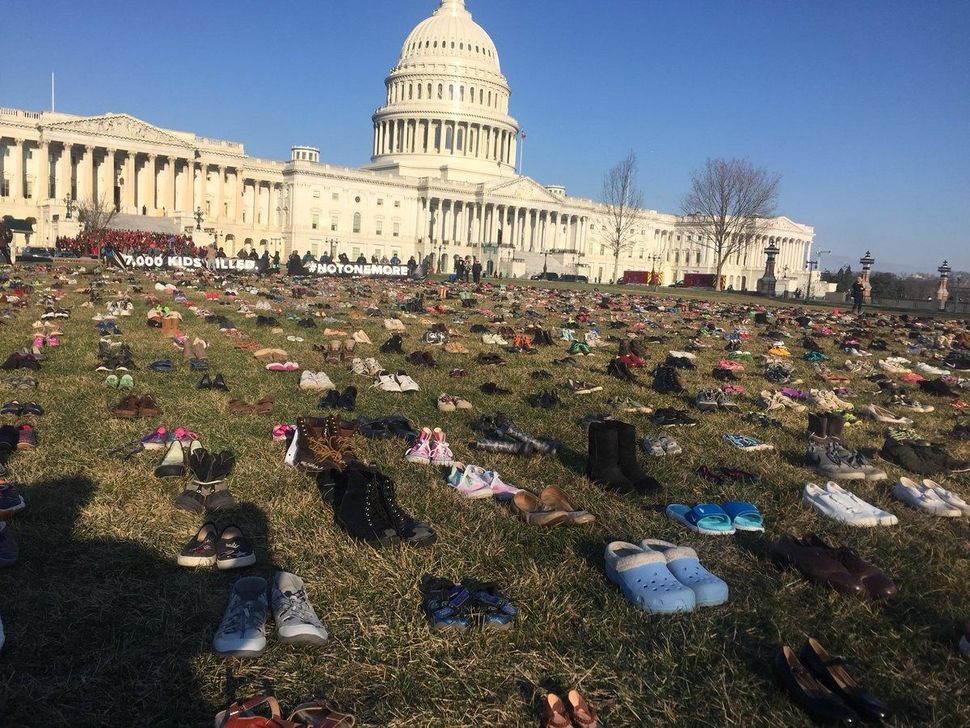 Thousands of shoes were placed on the lawn of the Capitol building in Washington, D.C. on Tuesday morning as part of a protest against school shootings.

The display of worn shoes, which were intended to draw Congress’ attention to children who have died from gun violence, was inspired in part by memorials to the Holocaust, its organizer told the Forward.

“The inspiration of today’s protest is driven by this idea that kids should be around to outgrow their shoes,” the deputy director of the progressive activist organization Avaaz, Emma Ruby-Sachs, told the Forward. “When I think of the shoes memorial at Auschwitz, that’s the thought that strikes me. Right now, as I’m looking at these shoes covering the ground outside the Capitol, I’m having that same thought.”

Ruby-Sachs said that she was partly inspired by displays of victims’ shoes at Auschwitz and at the United States Holocaust Memorial Museum. She added that her own Jewish faith is part of what powered her through spending the day standing outside in the cold. “There are people missing from our history that shouldn’t be missing. This is part of the Jewish story, for sure.”

Families of gun victims traveled to Washington to participate.

“I’ll travel to D.C. literally wearing my son Daniel’s shoes, the ones he wore the day he died at Columbine,” Tom Mauser told Newsweek. “I think this kind of event with shoes offers a very powerful metaphor both for how we miss the victims who once filled those shoes, and also for how we see ourselves wanting to walk in their place, seeking change, so that others don’t have to walk this painful journey.”