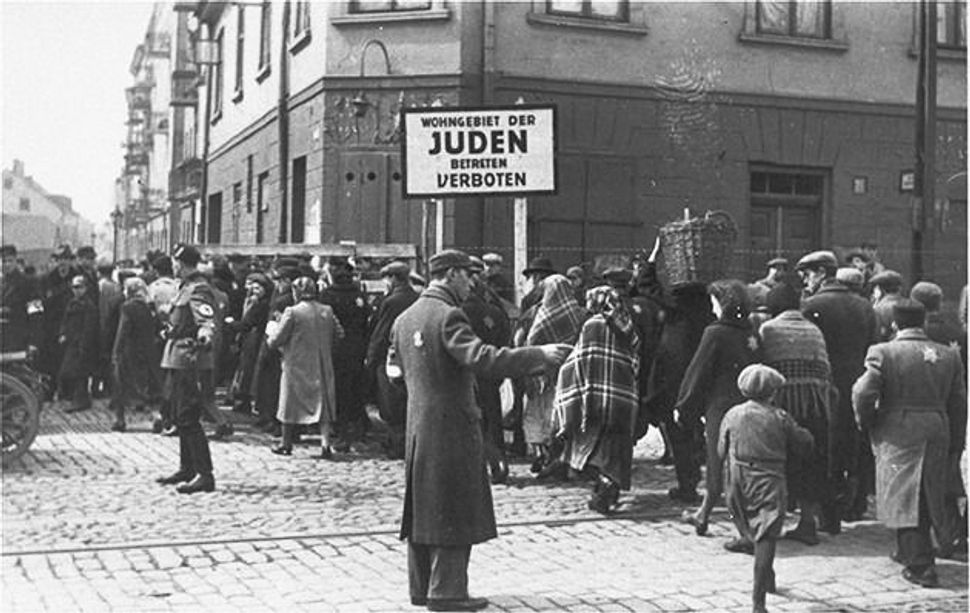 A Jewish policeman and a German soldier direct pedestrian traffic across the main street dividing the two parts of the Lodz ghetto (c. 1940).

(JTA) — A top Polish diplomat vowed to “intervene” in having text removed from the Yad Vashem Holocaust museum in Israel that speaks of “Polish police” under Nazi occupation.

Jan Dziedziczak, the deputy director of the Polish Foreign Ministry, complained about the text in an interview on Thursday while on a visit in Israel, Radio Maryja reported. The text said “Polish police” guarded the entrance to the Lodz ghetto.

His criticism of the text, which reflects a consensus among historians but which Dziedziczak said suggests Poles were complicit in the Holocaust, comes amid a diplomatic crisis in Israel-Poland relations over Poland’s passing last month of a law that criminalizes blaming Poland for the Holocaust. Israel protested the law, which international Jewish groups said prevents open discussion and may limit research on thousands of Poles who betrayed Jews to the Nazis or killed Jews.

“When I saw this inscription, I asked for immediate intervention from our diplomatic mission in Israel,” Dziedziczak said. “We will not leave this matter and we will do everything to change this information immediately.” He added that this would be the first of various ”actions to restore the truth.”

The Yad Vashem state museum on its website says that most of the police officers who served before the German occupation of Poland in 1939 complied with the occupiers’ order for them to return to duty under German auspices. By 1943, some 16,000 Polish officers, some of them armed, served under the Germans.