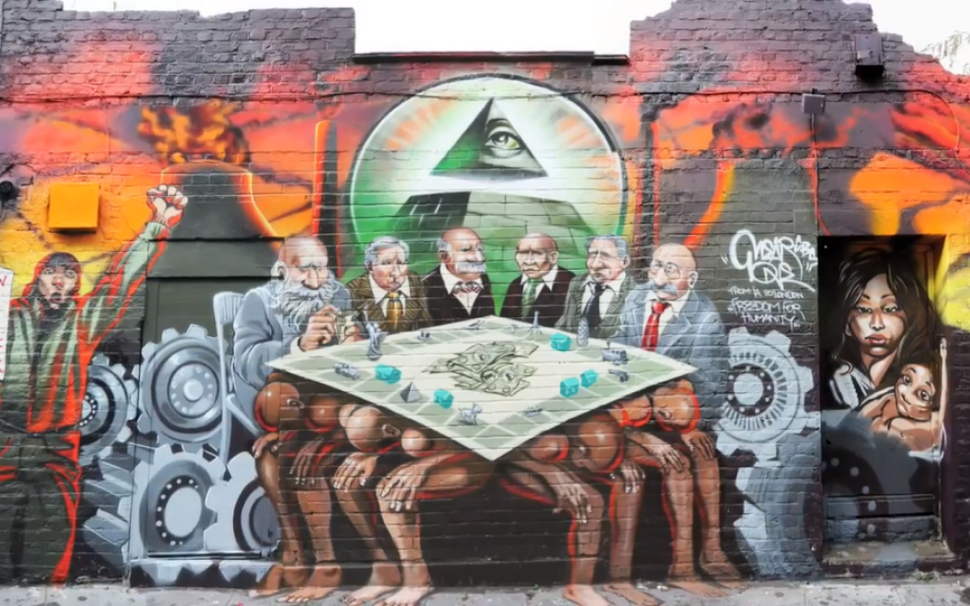 (JTA) — Jeremy Corbyn, the leader of the United Kingdom’s Labour party, said he had been wrong to support an artist who had painted a mural in London that Corbyn is now saying was anti-Semitic.

Corbyn, whose critics say has failed to confront the proliferation of anti-Semitism in the party by his supporters since he became its leader in 2015, said in a statement Friday: “I sincerely regret that I did not look more closely at the image” in question when he defended the artist’s artistic freedom in 2012.

The mural, titled “Freedom for Humanity,” depicts a group of businessmen and bankers counting money around a Monopoly-style board balanced on the backs of men with dark complexions.

While Corbyn has been accused many times of failing to act against anti-Semitism and especially in connection to hatred of Israel, the case surrounding the mural is unusual in that it does not concern the Jewish state and that in it Corbyn personally condoned what he later acknowledged to be racist propaganda.

The Los Angeles-based artist who painted the mural, Kalen Ockerman, had acknowledged in 2012 that some of the bankers were Jewish but said on Facebook the mural was not anti-Semitic.

“You are in good company,” Corbyn replied on that platform in 2012. “Rockerfeller [sic] destroyed Diego Viera’s mural because it includes a picture of Lenin.”

On Friday, Labour lawmaker Luciana Berger, who is Jewish, said she’d challenged Corbyn’s office about his comment to Ockerman on Facebook. This prompted Corbyn’s expression of regret, in whicb he added that the contents of the mural “are deeply disturbing and anti-Semitic. I wholeheartedly support its removal.”

After Berger’s questions and before Corbyn’s statement, the Labour leader’s office made a statement defending his post to the artist’s Facebook page as having been motivated by free-speech concerns before allowing that the mural was both offensive and “used anti-Semitic imagery, which has no place in our society, and it is right that it was removed,” Bloomberg reported.