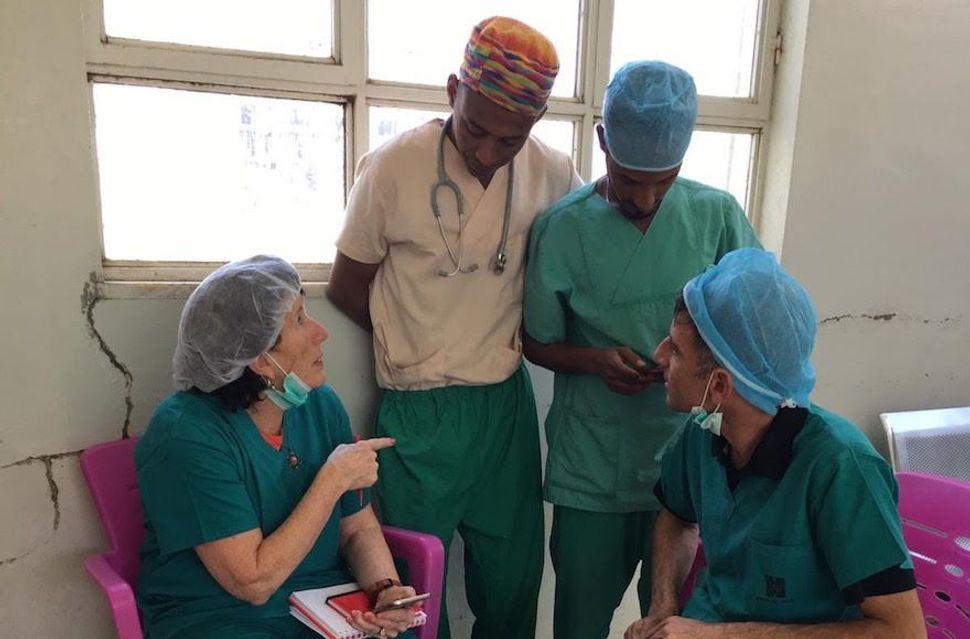 Medical personnel from Hadassah Medical Center in Israel and the Ayder Comprehensive Specialized Hospital in Mekelle, Ethiopia, confer during a Hadassah team’s mission in Ethiopia to perform spinal surgeries on young patients. Image by Courtesy of Hadassah

Eight doctors, two nurses and one physical therapist from the Hadassah Medical Center in Jerusalem traveled on the mission last week to the city of Mekelle, in the African country’s north.

The Israeli medical team performed five surgeries at the Ayder Comprehensive Specialized Hospital, which serves some 8 million patients but does not have a spine surgeon, according to Dr. Josh Schroeder, a spine surgeon at Hadassah who led the mission with Dr. Allon Moses, the chairman of Hadassah’s Department of Clinical Microbiology and Infectious Disease.

The patients, all aged 18 and under, had spine deformities so severe that they were causing potentially lethal complications, including pressure on internal organs and lung infections, Schroeder told JTA on Monday. The surgeries were complex, with some taking eight hours.

“The problem with pediatric cases is if you don’t treat them in time, they progress,” he said, “and these cases were so bad that if we wouldn’t have operated on these children, at least half of them would be dead by next year.”

In addition to performing the five surgeries, the Israelis also provided medical training to Ayder staff. The medical device company Medtronic donated the equipment necessary for the surgeries.

Schroeder said he was happy to have coordinated and participated in the mission.

“We’re working in a really privileged society, both in Israel and the United States, and things that we have at our fingertips don’t exist over there,” he said. “These people, you can really change their lives with a reasonably short intervention.”

The Hadassah and Ayder hospitals have a partnership dating back five years, with Israeli medical students doing rotations in Mekelle, and Ayder physicans receiving training and supplies from Hadassah.