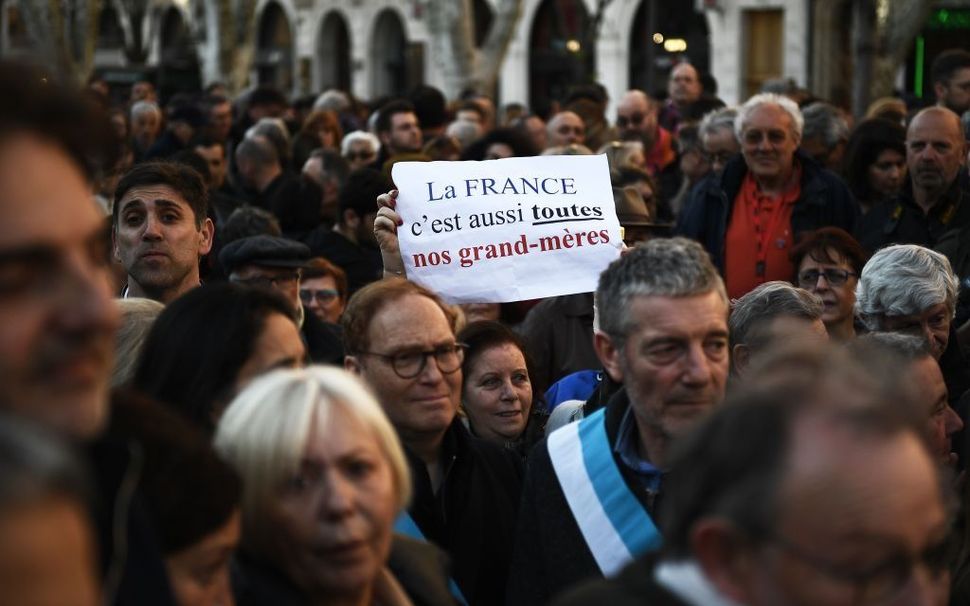 A woman holds placard reading ‘France is also all our grandmothers’ during a gathering in Marseille on March 28, 2018, in memory of Mireille Knoll, an 85-year-old Jewish woman murdered in Paris in her home in what police believe was an anti-Semitic attack. Image by ANNE-CHRISTINE POUJOULAT/AFP/Getty Images

PARIS (JTA) — At least 10,000 people participated in a memorial march in Paris for an 85-year-old Holocaust survivor who was burned and found dead with 11 stab wounds.

Many of the marchers Wednesday were Jews, and some wore Israeli flags at the march for Mireille Knoll, who was found in her apartment last Friday. The march began at the Place de la Nation and culminated at the apartment.

The march, which was covered heavily by French media, was encouraging for French Jews, who in the past have felt ignored by their government. Authorities believe Knoll was murdered by her Muslim neighbor in an anti-Semitic hate crime.

One participant, Holocaust survivor Nicole Friedman, told JTA that she came to the march “because I’m Jewish, and because I lived through the war.” Flanked by her daughter, Friedman marched slowly with the aid of a cane.

Another marcher, Alain Ndigal, wore an Israeli flag. Ndigal is of African descent and not Jewish.

“I came because this barbarity concerns us all,” the 48-year-old mechanic said.

Meanwhile, the appearance of Marine Le Pen, head of France’s far-right National Front party, caused a small scuffle to break out. Dozens of her supporters shouted “Marine is with us” while others shouted “N for Nazi,” referencing the first letter of her party’s name in French.

The head of the CRIF umbrella of French Jewish communities, Francis Kalifat, had said that neither leaders from the National Front nor the Insubmissible France far-left movement were welcome due to their history of perceived anti-Semitism. Jean-Luc Melenchon, head of Insubmissible France, also attended the march, ignoring Kalifat’s call.

Earlier Wednesday, French President Emmanuel Macron attended Knoll’s funeral in the Paris suburb of Bagneux. He wore a kippah and was seen talking with Knoll’s friends and relatives.

Knoll’s attacker “murdered an innocent and vulnerable woman because she was Jewish, and in doing so profaned our sacred values and our history,” he said at the funeral.