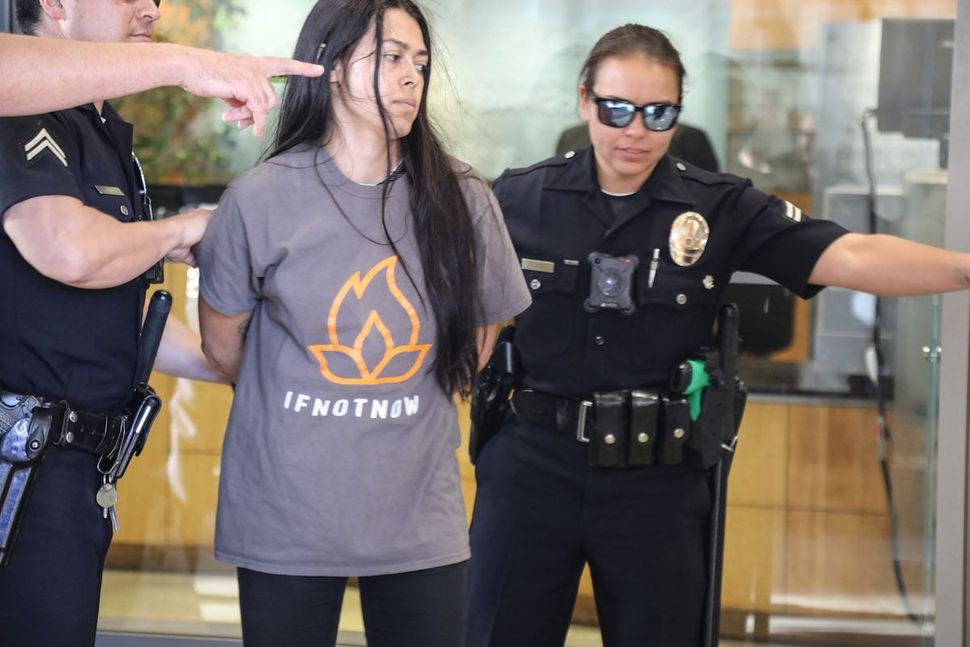 A member of the leftist Jewish group IfNotNow was arrested for protesting outside the Jewish Federation of Greater Los Angeles. Image by Courtesy of IfNotNow

Four activists affiliated with the leftist Jewish group IfNotNow were arrested Wednesday after blocking the doors of the Jewish Federation of Greater Los Angeles and protesting the national Federation group’s silence on the deaths of Palestinians in the Gaza Strip, the protesters said in a statement.

IfNotNow had called on the Jewish Federations of North America to release a statement condemning the deaths of more than 30 Palestinians in clashes with Israeli security forces in the past two weeks.

Around 30 members of IfNotNow demonstrated outside the L.A. Federation, recited the Mourner’s Kaddish prayer, posted pieces of paper with names of Palestinians who had died to the outside of the building, and blocked the entrance, leading to a confrontation with the building’s security.

“I grew up in the Jewish community of Los Angeles, where I learned that freedom and dignity are core Jewish values. As young Jews and members of this Jewish community, we’re asking the Federation to do the bare minimum and condemn this unconscionable violence,” Elon Glickman, one of the IfNotNow members who was arrested, said in a statement. “How long will they stay silent as live ammunition is used against Palestinian protesters? How many more Palestinians need to be killed before they speak out?”

IfNotNow has organized similar protests outside the Israeli consulate in Boston, the New York City office of Senate Minority Leader Chuck Schumer, and the Jewish Community Relations Council of Minnesota and the Dakotas. Two more protests are expected, an IfNotNow spokesperson said in a statement.

Israel’s consul general in Boston, Yehuda Yaakov, later accused the protesters there of “lawlessness” for chaining themselves to the building’s entrance.