What Is Women’s March Leader Tamika Mallory Doing In Israel And The West Bank? 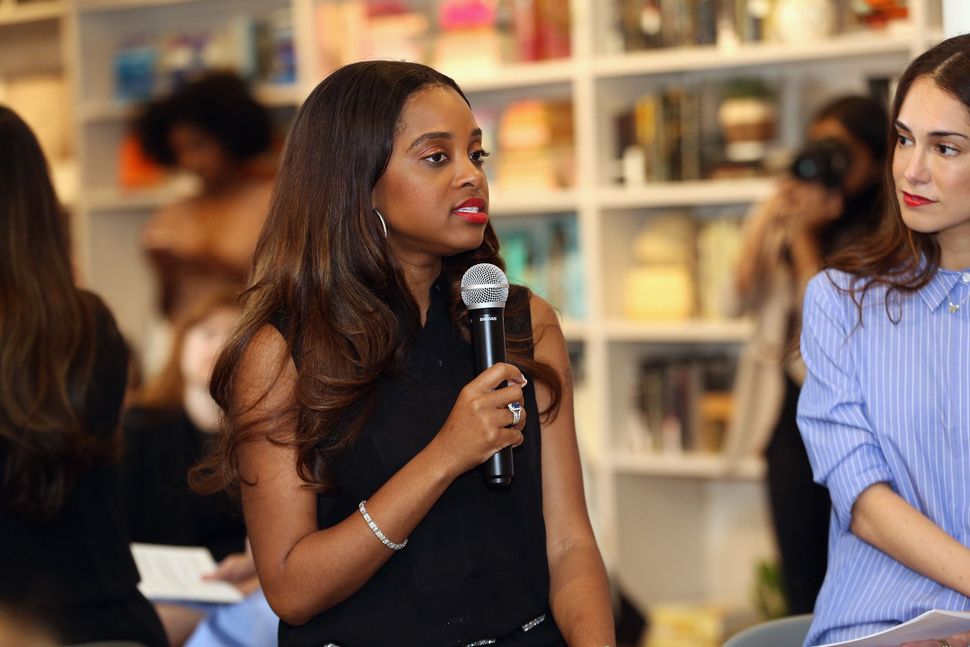 Women’s March National Co-Chair Tamika Mallory speaks on a panel during a VIP screening of “The Handmaid’s Tale.” Image by Robin Marchant/Getty Images for Hulu

Tamika Mallory, the co-chair of the Women’s March who was harshly criticized for refusing to condemn the anti-Semitic Nation of Islam leader Louis Farrakhan, is traveling in Israel and the Palestinian territories as part of a delegation of left-wing activists organized by the Center for Constitutional Rights.

“To walk where Jesus walked is already overwhelming….to do it with a brilliant group of leaders is life-changing!” Mallory tweeted on Monday.

In the past few days, Mallory and her fellow tour participants have already visited much of Israel and the West Bank. They received a briefing and tour from Grassroots Jerusalem, an organization that, according to its website, “reveals the political and grassroots reality of Jerusalem by exposing how Israeli policies continue to suffocate Palestine’s capital and largest metropolitan area.” Mallory wrote on Twitter that she “learned a lot” from the tour.

Mallory very well might not have made it to Israel: The Center for Constitutional Rights said that executive director Vincent Warren and board chair Katherine Franke were deported after being denied entry into the country and subjected to 14 hours of questioning at Ben Gurion International Airport about their association with anti-Israel groups.

Warren told the Forward in the email that Mallory was selected for the trip “because of her excellent work, leadership and her politics of inclusion.”

“Tamika Mallory is a long time activist who has been subjected to targeting by a campaign to falsely paint her as anti-Semitic through her relationships with controversial groups or figures,” he wrote, adding, “The important work of everyone on the trip speaks for itself, despite false and harmful characterizations to the contrary.”

As well as visiting Jerusalem, the group has toured Hebron in the West Bank with a leader of Breaking the Silence, the controversial not-for-profit that collects testimonies of Israeli soldiers who served in Palestinian areas.

Additionally, they met with a former Palestinian political prisoner, saw the separation barrier in Jericho, and learned from a Bedouin activist about Israel’s policy of destroying unauthorized villages in the Negev desert.

The Center for Constitutional Rights said in a statement Tuesday that the trip was designed to help participants “better understand the human rights situation in Israel and Palestine, including the history of systematic displacement and institutional racism, as well as the work of human rights defenders there.”

These types of delegation tours featuring meetings with local activists and experts are common in Israel and the West Bank, and are organized by groups with all manner of opinions on the conflict, and can be offered exclusively to important leaders or simply to ordinary individuals who sign up.

The executive director of one group that organizes such tours, T’ruah: The Rabbinic Call for Human Rights, said that it was important for participants on such trips to hear diverse views.

“I don’t know the itinerary of this particular trip, but do think that it’s important that anyone who visits the region hear both Israeli and Palestinian narratives, including learning about the long and deep connection to the land that both Jews and Palestinians have, engaging with the real human rights concerns there, and meeting human rights leaders and peacemakers on all sides,” Rabbi Jill Jacobs told the Forward in an email.

Warren said in an email that the trip would last about a week, and had over a dozen participants. Among the other local groups that participants have met or will meet with include the Palestinian NGOs Al Haq and Addameer and the Israeli human rights groups Yesh Din and Adalah – The Legal Center for Arab Minority Rights In Israel. None of these groups are known to be very supportive of Israeli policies.

Participants are “mostly Black and Brown civil and human rights leaders working on domestic U.S. justice issues who have not had an opportunity to visit Palestine and Israel,” the Center for Constitutional Rights statement explained.

Seeing things for themselves and building relationships with Israeli and Palestinian peace activists is “critically important,” the deputy director of Jewish Voice for Peace, Rabbi Alissa Wise, told the Forward in an email.

“There are critical connections to be made, as is the purpose of the [trip], to connect Black and Brown people’s experiences in the U.S. with the situation of Palestinians,” she said. “This is even more critical given the Israeli government’s longstanding policy to refuse Palestinians living in diaspora to visit their families and homeland, and their increasing denial of entry to those who dare to critique the government or speak out for Palestinian human rights,” such as the leaders of the Center for Constitutional Rights.

Mallory’s presence on the trip may make the entire enterprise a lightning rod. Her refusal to condemn Farrakhan led to her being criticized by multiple local chapters of the Women’s March as well as numerous Jewish leaders and organizations.

She also received attention earlier this month for calling on Starbucks to remove the Anti-Defamation League from the list of groups assisting in bias training because the Jewish organization is “CONSTANTLY attacking black and brown people.” The ADL was later dropped from its main planning role.

What Is Women’s March Leader Tamika Mallory Doing In Israel And The West Bank?