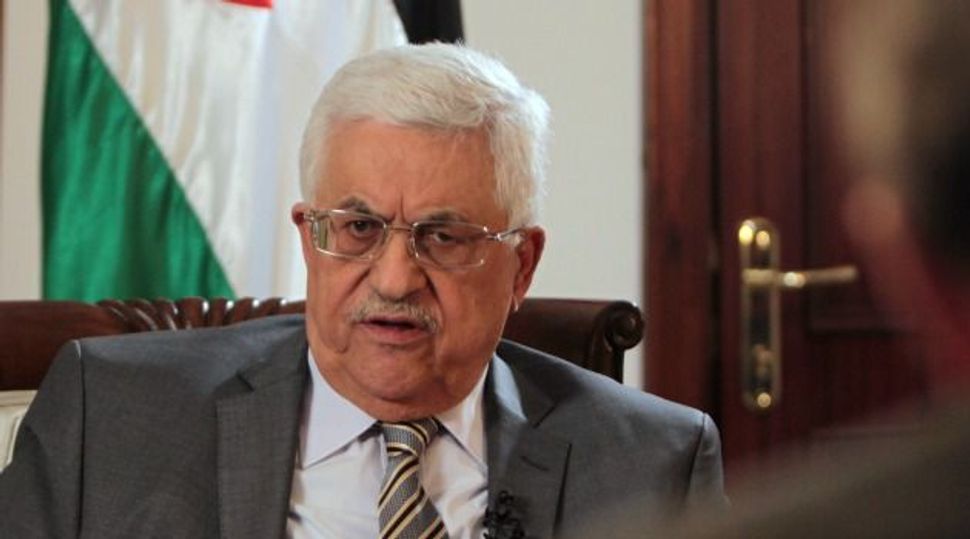 (JTA) — In an unusual move, the main Palestinian lobby group in Germany condemned remarks by Palestinian Authority President Mahmoud Abbas about the Holocaust which it called “anti-Semitic.”

The German-Palestinian Society, or DPG, in a statement Tuesday said it “dissociates itself clearly and unequivocally” from the remarks by the Palestinian Authority president.

Speaking Monday in the West Bank city of Ramallah, Abbas said that Jews caused the Holocaust with their “social behavior,” such as money lending. He also said that Jews do not have a historical connection to the land.

“To suggest that Jews in some way share a responsibility for the Holocaust is a grotesque distortion of historical facts,” DPG wrote in its statement. “The claim that the Jewish people have no roots in the Holy Land is equally erroneous,” the statement read. It called Abbas’ address a “speech riddled with anti-Semitic remarks.”

Allegations of anti-Semitism against Abbas by key allies in Europe are rare. The Holocaust is a sensitive issue in Germany, whose Nazi leadership masterminded and led the genocide during World War II. The DPG’s open rebuke of Abbas may also reflect growing discomfort with his increasingly radical rhetoric among allies stating the case for Palestinian rights in liberal societies.

The European Jewish Congress on Wednesday called on European leaders and officials to cease all contact with the Palestinian leader until he apologizes for his outrageous anti-Semitism and Holocaust denial.

European Union officials, including the organization’s diplomats in Israel, have so far not commented publicly on Abbas’ speech. The United States’ ambassador to Israel, David Friedman, condemned Abbas’ statements, calling them a “new low.”