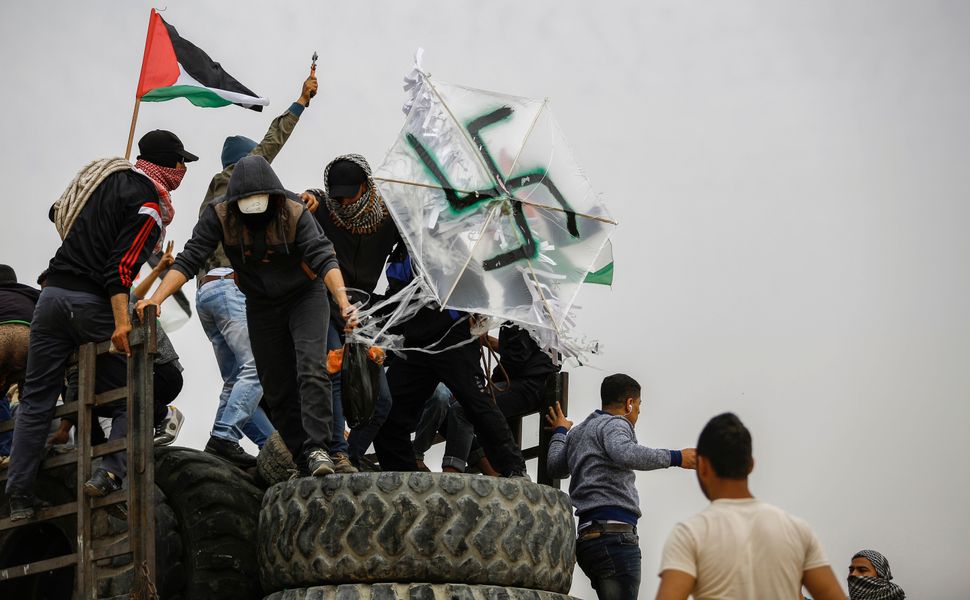 Palestinian protesters carry a kite defaced with a swastika during clashes with Israeli forces across the Gaza border. Similar kites have been used as firebombs, setting Israeli farm fields and forests ablaze. Image by MOHAMMED ABED/AFP/Getty Images

JERUSALEM (JTA) — The Israel Defense Forces bombed a Hamas position in Gaza after it was used to launch kites carrying explosives.

The Israeli military attack on Saturday night was in response to the incendiary kites, which have sparked fires in the current hot and dry weather which have burned more than 200 acres of agricultural fields, as well as forest and grasslands.

An explosives-laden kite landed in southern Israel on Friday morning, starting a fire near Kibbutz Kissufim.  On Wednesday, 10 teams of firefighters were called to the Beeri Forest near Kibbutz Beeri to bring a fire sparked by an incendiary kite under control, the largest fire triggered by the kites so far since they were first launched at the end of March.

It is reportedly the first time that the IDF has acted in response to the kites, which have been a new terrorist tool from Gaza in recent weeks. The explosives-laden kites are an escalation of the weekly protests called the March of Return, which are scheduled to end on May 14, the 70th anniversary, according to the Gregorian calendar, of the birth of the modern State of Israel.

“The IDF will continue to operate against terror activity above and below ground, and holds the Hamas terror organization responsible for all terror activities in the Gaza Strip,” the IDF said in a statement.

The IDF also stated that the Saturday night attack was not related to an explosion on Saturday evening in central Gaza, in which six Palestinians were killed, four of them members of the Hamas military wing.

Haaretz cited a Palestinian source as saying the explosion likely was triggered by Hamas agents handling explosives, often referred to as a “work accident.”

But the Hamas military wing, known as the Qassam Brigades, blamed Israel for the explosion, calling it a “deplorable Zionist crime.”