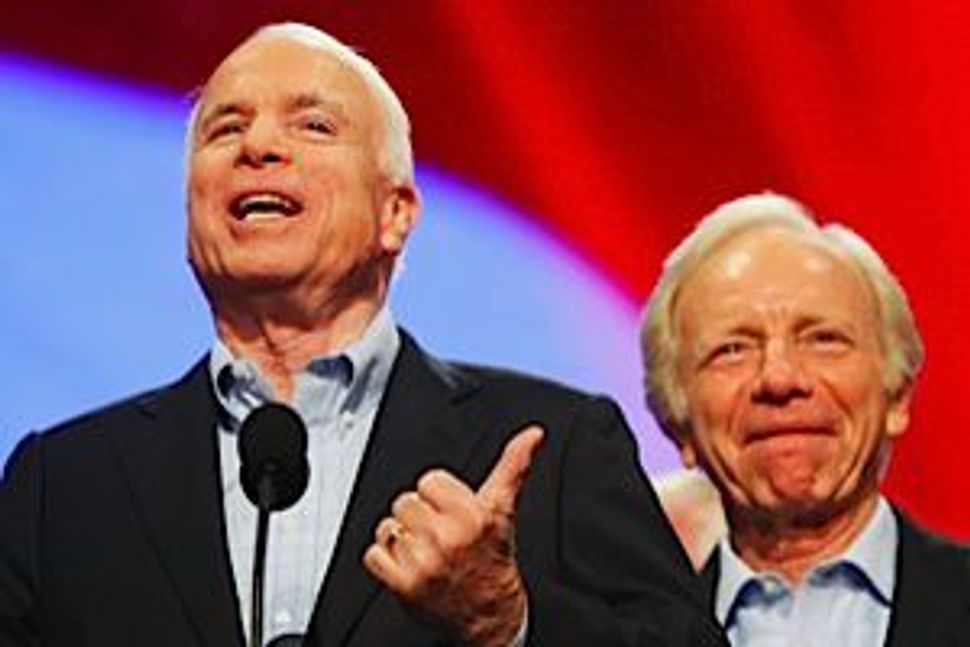 (JTA) — Sen. John McCain is using his new book and a documentary to publicly express his regret at not choosing former Senate colleague Joseph Lieberman as his running mate in the 2008 presidential election, The New York Times reported.

McCain wrote in the book, which the newspaper said it obtained independently of the Arizona Republican, that his advisers warned him against picking Lieberman, a Connecticut Democrat who turned Independent, because of his support for abortion rights. The advisers believed that support would divide the party.

“It was sound advice that I could reason for myself,” he wrote in “The Restless Wave,” according to The Times. “But my gut told me to ignore it and I wish I had.”

Other Republicans believe that McCain’s selection of Alaska Gov. Sarah Palin as his running mate was responsible for “unleashing the forces of grievance politics and nativism” within the party. McCain lost to Barack Obama, a U.S. senator from Illinois, in the election.

McCain, 81, is battling the brain cancer that he was diagnosed with last summer and for which he is undergoing aggressive treatment. He spends most of his time at his Arizona ranch.

The book and a nearly two-hour HBO documentary are scheduled to come out later this month.

In the documentary, McCain calls the decision not to pick Lieberman “another mistake that I made” in his political career. Lieberman, who was Democratic presidential candidate Al Gore’s running mate in 2000 — the first Jewish vice presidential nominee on a major ticket — told The Times that he didn’t know McCain felt that regret until he watched the film.

“It touched me greatly,” he said.

According to the article, those close to McCain have told the White House that the longtime senator plans for Vice President Mike Pence to attend the funeral service to be held in Washington’s National Cathedral but not President Trump.