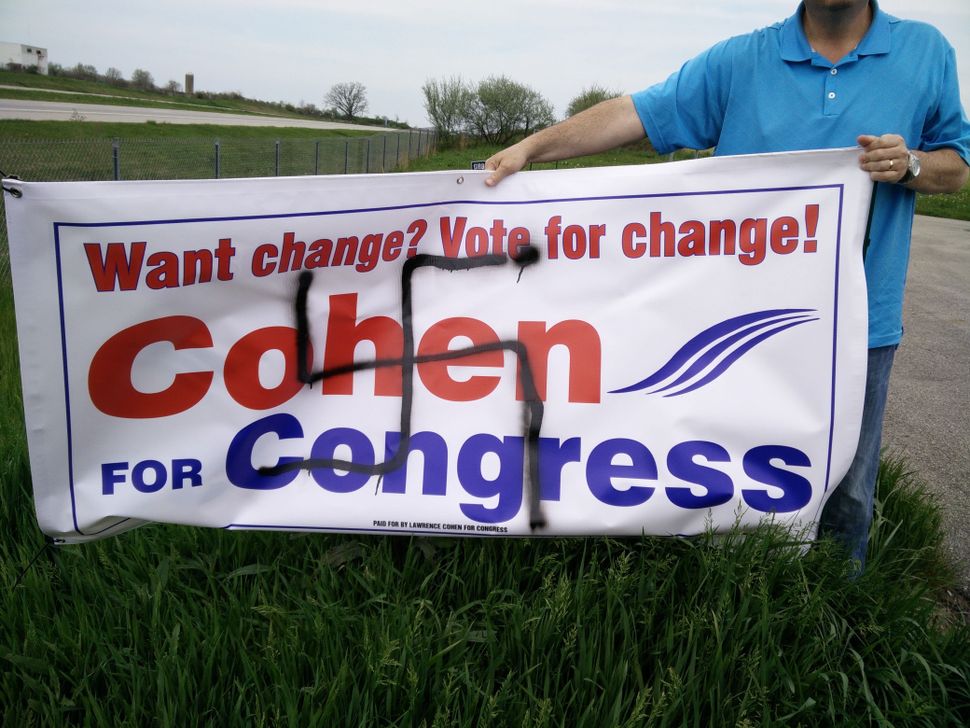 Cohen discovered the sign while putting up campaign signs that had been blown over in a recent storm. Image by Courtesy of Lawrence Cohen

A Jewish candidate for Congress from Ohio said Monday that one of his campaign signs had been spray painted with a swastika, WBNS reported.

Lawrence Cohen is one of 10 candidates vying for the Republican nomination in Ohio’s 12th district. He works as an accountant and has worked with the IRS.

Cohen told the Forward he found the lawn sign painted with a black swastika while putting up campaign signs in his district that had been blown over by a recent storm.

“It seems like they decided that a Jewish candidate running for Congress was not something they could tolerate and decided to deface the sign,” he told WBNS. “Whether it’s on a banner for a congressional candidate, or the side of a synagogue, or on a Jewish doctor’s office, it’s a hate crime and it’s extremely disturbing.”

Cohen filed a police report with the local sheriff’s office. He said he did not think that the swastika had been painted by anyone affiliated with any of his primary opponents.

“This happened on the last weekend day before today’s primary, a day I should have been spending campaigning, knocking on doors and talking to voters,” Cohen told the Forward in an email. “Instead I had to deal with this, the emotions it created, try to get my head back in the right place and spend time with the Licking County Sheriff filing a report.”

Cohen added that his children have received anti-Semitic texts from classmates.

The district’s former representative, Pat Tiberi, resigned in January with news reports suggesting that he left out of frustration with Donald Trump’s leadership of the Republican Party.