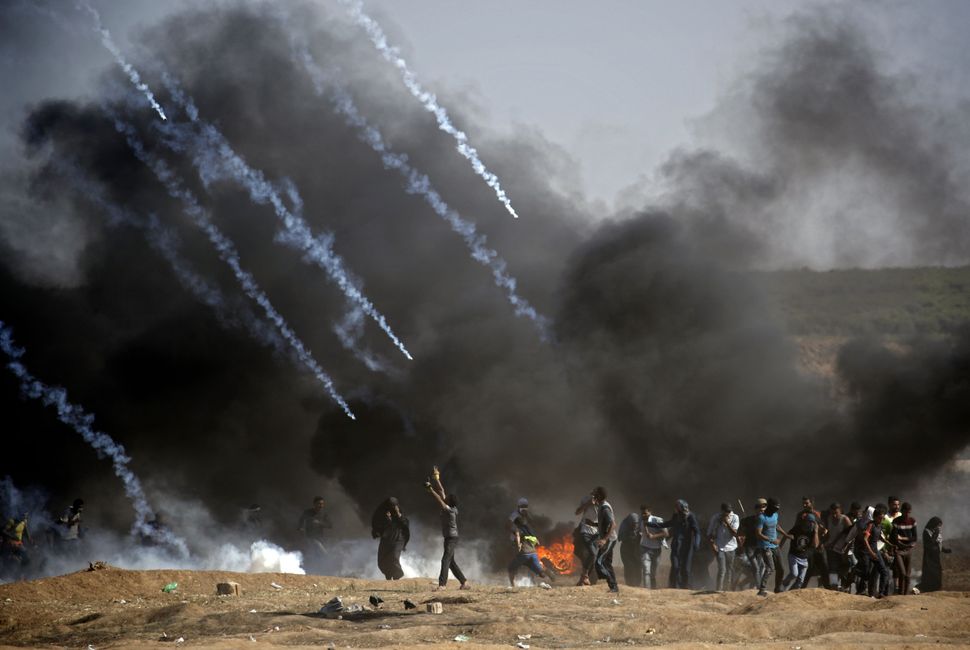 Tear gas is fired at protestors during clashes with Israeli forces near the border between the Gaza Strip and Israel following the the controversial move to Jerusalem of the United States embassy. Image by THOMAS COEX/AFP/Getty Images

(JTA) — Turkey recalled its ambassadors to the United States and Israel after at least 50 Palestinian protesters were reportedly killed at the Gaza border.

Turkish President Recep Tayyip Erdogan accused Israel of “genocide” over the killings in Gaza. Tens of thousands gathered of Palestinians gathered there for protests in the hours before the dedication of the new U.S. embassy in Jerusalem earlier today. Over 2,400 were injured.

The Israel Defense Forces said that it is “operating according to standard operating procedures” and claimed that several protesters were planting explosives. Some flew flaming kites across the border, and at least one started a wildfire, according to The New York Times.

“Given the indiscriminate and grave manner of the latest Israeli attack‚ the South African government has decided taken a decision to recall Ambassador Sisa Ngombane with immediate effect until further notice‚” read a statement from the country’s Department of International Relations and Cooperation.

The protests are part of the March of Return, a longstanding demonstration that has taken place every Friday at the border for the last seven weeks, leaving at least 48 Palestinian protesters dead and thousands wounded. The protests were supposed to end on May 14, the day on the Gregorian calendar when Israel became an independent state 70 years ago. The Arab world calls this event the Nakba, or “catastrophe.” Hamas leaders have called for the protests to continue beyond Monday.

“The IDF will act forcefully against any terrorist activity and will operate to prevent attacks against Israelis,” the military said in a statement that also appeared on Twitter.