No, Hitler Is Not Alive On A Secret Nazi Moon Base 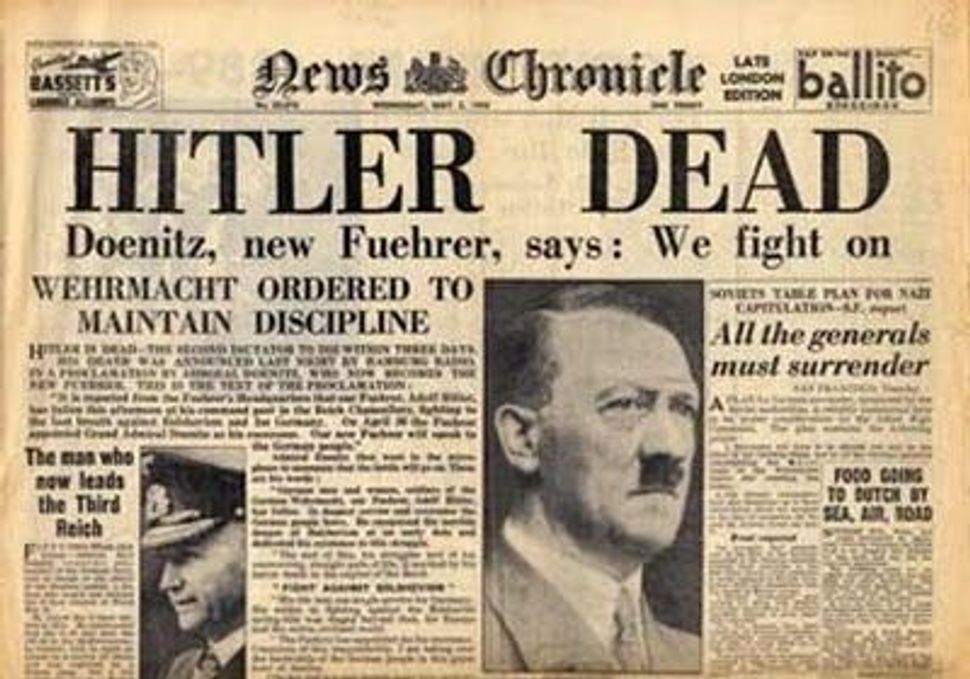 A newspaper headline announces news of Hitler’s death in 1945. Image by Flickr

A new study claims to have found proof in the remains of Adolf Hitler that he did in fact die in 1945 — and that he did not, as some conspiracy theories claim, escape by submarine to Argentina, and possibly even to the moon.

The peer-reviewed study, released last week in the European Journal of Internal Medicine, marked the first time that the Russian government had granted outside access to the alleged remains of Hitler, which the Soviet army claimed it had found when it arrived in Berlin in April 1945. That both Soviet and post-Soviet Russian governments had refused to allow researchers to study the remains had helped drive theories that Hitler used underground tunnels and bunkers to escape Berlin as the Allies closed in. The History Channel has broadcasted three seasons of its show, “Hunting Hitler,” which is based on the premise that Hitler lived out his days in a secret Nazi base in Argentina.

Last year, French researchers were allowed to sample and examine Hitler’s jawbone, which they contrasted with dental records from during the war. They are confident in their conclusion.

“There is no possible doubt. Our study proves that Hitler died in 1945,” co-author Philippe Charlier told Agence France-Presse. “He did not flee to Argentina in a submarine. He is not in a hidden base in Antarctica or on the dark side of the moon.”

Charlier said that the analysis hinged on the state of Hitler’s teeth. According to Charlier, Hitler had unusually shaped molars — something shown by his dental records.

“There was a perfect anatomical and technological correspondence,” Charlier told a documentary team.

Electron microscope analysis of the molars also revealed no traces whatsoever of meat — a telling find for the chompers of Hitler, who was a vegetarian. Researchers further suggested that bluish marks on the teeth could have been the result of a chemical reaction between Hitler’s metal dentures and the cyanide capsule he swallowed when he killed himself.

No, Hitler Is Not Alive On A Secret Nazi Moon Base