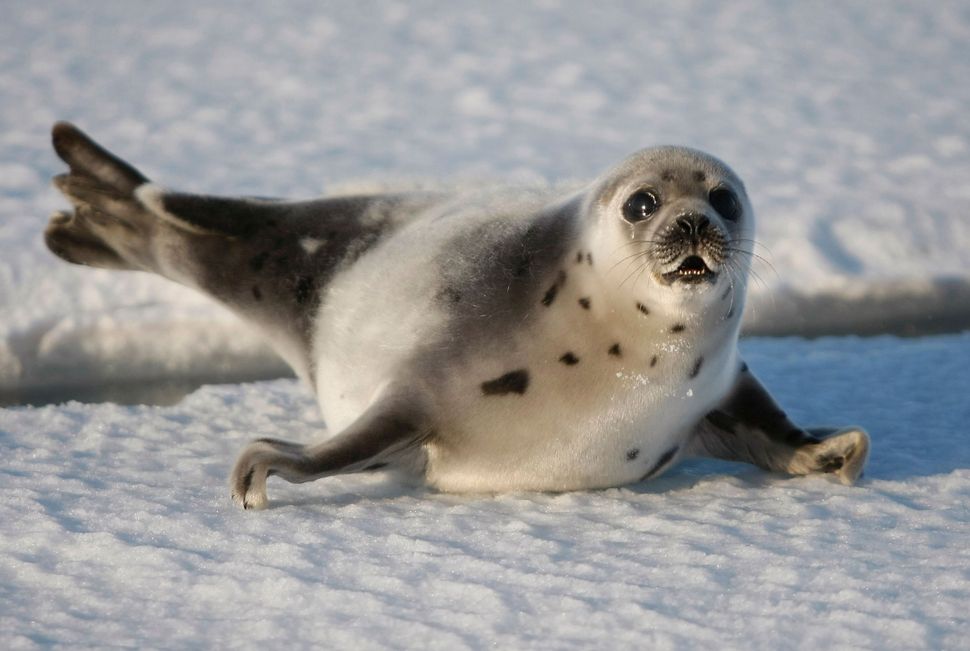 A seal pup lies on an ice floe in the Gulf of Saint Lawrence in Canada. Image by Joe Raedle/Getty Images

A 21-year-old Jewish Inuit activist from Canada’s far north has spoken out about the similarities between her two backgrounds — and how it may affect Jewish dietary laws.

Killaq Enuaraq-Strauss grew up in Iqaluit, the capital of the northern Canadian territory of Nunavut. Her father is Jewish and her mother is Inuk (the singular for Inuit). She told the CBC last week that she overcame bullying at her boarding school to gain a greater appreciation for her two backgrounds.

Enuaraq-Strauss pointed out that both of her cultures believe in treating animals humanely. For example, Inuit are supposed to provide water for any seals they catch, and Judaism also emphasizes minimizing pain for animals.

Enuaraq-Strauss argued that seals, a staple of Inuit diets and traditions, can be considered kosher.

“There’s a law called in Judaism called ‘pikuach nefesh’, which essentially says that your survival is more important than most other law in Judaism and therefore can be overridden in a case of necessity,” she said. “So to me, as an Indigenous person, that strongly means that seal, although is a marine mammal that is not at all considered kosher because it doesn’t follow in line with any of the laws of kosher…to me, it’s still kosher.”

Enuaraq-Strauss has previously spoken out about the importance of seals for Inuit people: As a 17-year-old in 2014, she started a viral campaign criticizing talk show host Ellen DeGeneres for donating to the Humane Society of the United States, which has long campaigned against Canadian seal hunts.

“We do not hunt seals, or any animal for that matter, for fashion,” Enuaraq-Strauss said in the video that started the campaign. “We hunt to survive. If Canada were to ban the seal hunt, so many families would suffer, would face harsher forms of malnutrition, and wouldn’t be able to afford proper clothing for the Arctic environment we live in. Even more so, another part of our culture would have been killed.”

As part of the campaign, activists posted “sealfies” — pictures of themselves wearing seal fur.