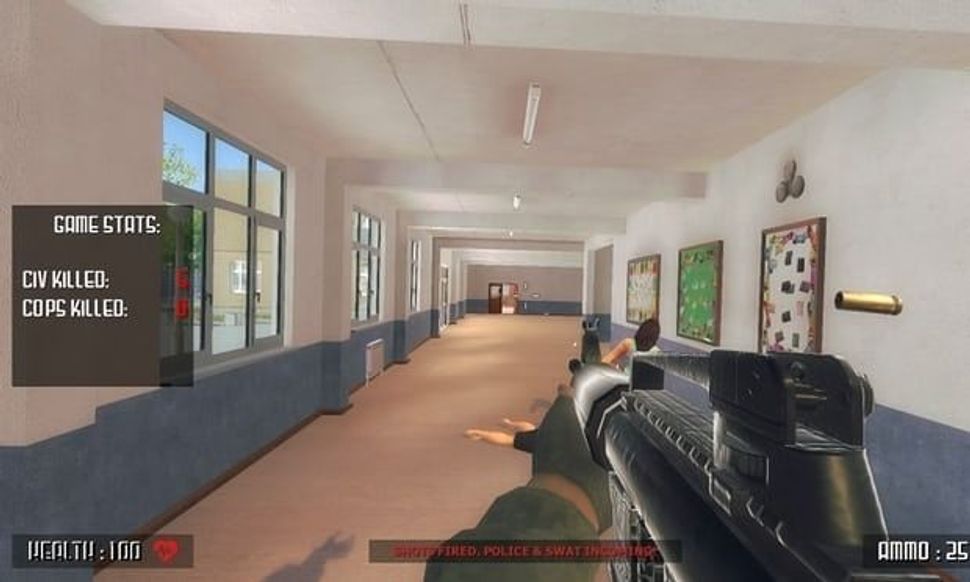 A still from the video game “Active Shooter.” Image by Acid

A video game that simulates a school shooting is being condemned by parents of children who died during the mass shooting in February at Marjory Stoneman Douglas High School in Parkland, Florida.

“Active Shooter” is marketed as a SWAT team simulator, where players take the role of an armed officer responding to a school shooting, the Guardian reported. However, the game also allows users to play as the shooter or as a civilian attempting to escape the scene.

Screenshots released by the developer, seemingly taken from the perspective of the shooter, show SWAT team officers and students being gunned down in various locations including a gymnasium, hallways and cafeteria.

The game has received strong backlash, including from the parents of Parkland victims. Fred Guttenberg, whose 14-year-old daughter Jaime was killed in Stoneman Douglas, urged people to boycott the game.

“I have seen and heard many horrific things over the past few months since my daughter was the victim of a school shooting and is now dead in real life,” he wrote on Twitter. This game may be one of the worst.”

I have seen and heard many horrific things over the past few months since my daughter was the victim of a school shooting and is now dead in real life. This game may be one of the worst.

The game is set for release on Steam, the largest digital store for PC games with more than 125 million users.

In response to the criticism, the game’s publisher, Acid, released a “clarification” on the game’s Steam page, claiming that Active Shooter “does not promote any sort of violence, especially any soft [sic] of a mass shooting.” On the Steam store page, however, customers are encouraged to “Pick your role, gear up and fight or destroy!”