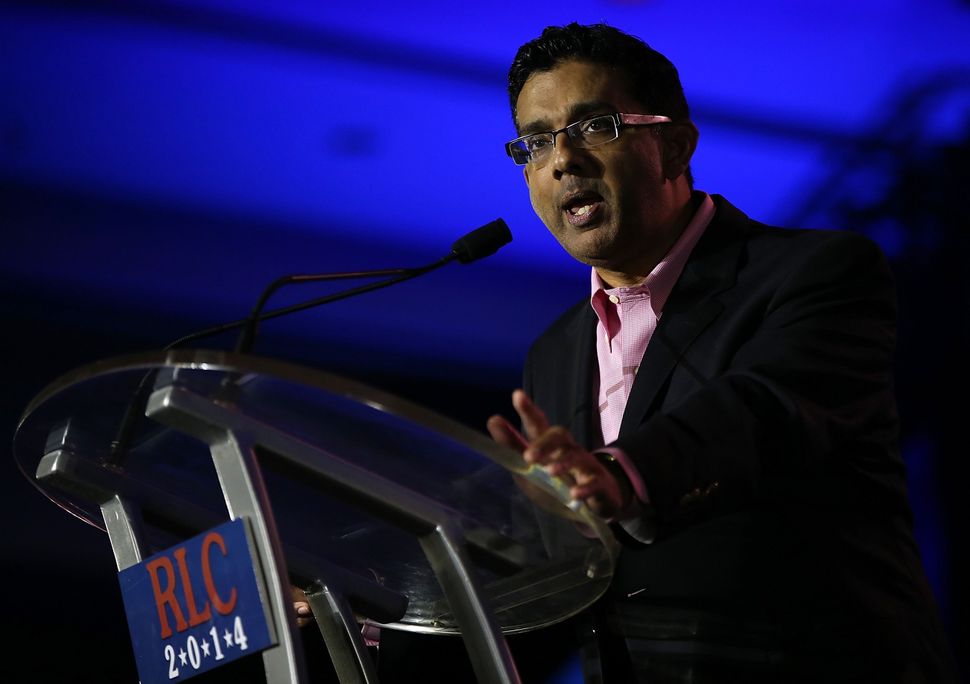 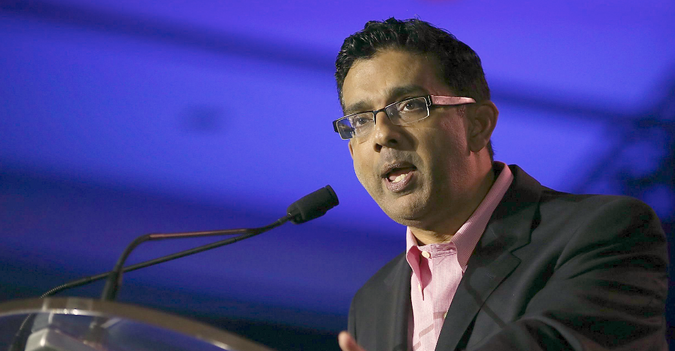 D’Souza has been criticized even by fellow conservatives for his frequently racially-charged public output, such as his decision to criticize former president Barack Obama’s use of a selfie stick by tweeting, “You can take the boy out of the ghetto…” and his repeated claims that Obama’s policies were steered by his Kenyan father’s anti-colonialism.

While most of his output centered on critiques of liberalism, D’Souza’s long career as a pundit and writer has also led him to make controversial statements that affect the Jewish community:

Last spring, D’Souza retweeted a trailer for the movie ‘Death Of A Nation’ that included the offensive hashtag. He later claimed he hadn’t noticed it.

Just hours after the Pittsburgh synagogue shooting, President Trump approvingly retweeted D’Souza for mentioning that Abraham Lincoln was an “outsider” (presumably like Trump) who sent “Democrats berserk (like Trump thinks he has).

D’Souza’s 2017 book “The Big Lie: Exposing the Nazi Roots of the American Left,” was criticized by historians for claiming that Democrats are the party of fascism and that the Nazi Party in Germany drew inspiration from the American Democratic Party. One of his key arguments is that the Nazis were on the left because Nazi is short in German for “National Socialist.”

D’Souza also has written that Nazi dictator Adolf Hitler “was NOT anti-gay,” arguing that Hitler had refused to purge gay members of the Brownshirt militia. According to the United States Holocaust Memorial Museum, around 100,000 men were arrested between 1933 and 1945 for violating Nazi anti-homosexuality laws, and up to 15,000 died in concentration camps.

He compared Bernie Sanders to Hitler

D’Souza has repeatedly compared Sanders, whose father’s relatives died in the Holocaust, with Hitler. He has repeatedly made the argument that Hitler’s criticisms of capitalism sound like something Sanders would say.

“Bernie Sanders wants the guys in Midland Texas to take the oil out of the ground and create all this wealth and then we’ll tell you what you can do with it,” D’Souza said in a speech last year at the University of Tennessee at Chattanooga. “This is what happened in Mussolini’s Italy in the 1920s when the government decided to quarterback all the major industries and this is what happened in Nazi Germany when the government was creating and directing the auto industry and the energy industry, and other parts of the economy.”

D’Souza is one of the most prominent promoters of the claim that billionaire Jewish financier and philanthropist George Soros collaborated with the Nazis in his native Hungary, a claim that Soros has long denied and that the Anti-Defamation League has denounced as “offensive” and “horrific.” Nonetheless, D’Souza has referred to Soros as “Hitler’s collection boy,” compared him to the Nazi doctor Josef Mengele and tweeted that it would be “interesting to see @georgesoros extradited to Israel & tried for his complicity in Nazi atrocities against Jews.”

D’Souza has also spread conspiracy theories that Soros has paid protesters to advocate against conservative causes and that he has sponsored the sometimes-violent left-wing antifa movement. “If #Antifa is a terror group then former Nazi collaborator George Soros should be investigated as a sponsor of domestic terrorism,” D’Souza tweeted last year.

He blamed famous Jews for 9/11

D’Souza’s 2007 book “The Enemy at Home: The Cultural Left and Its Responsibility for 9/11” provides a list of dozens of liberals that he claims angered Muslim terrorists into committing the worst terror attack in American history. “The cultural left and its allies in Congress, the media, Hollywood, the nonprofit sector, and the universities are the primary cause of the volcano of anger toward America that is erupting from the Islamic world,” he wrote.

The book helpfully provides a list of individuals whom he considers responsible, broken down into categories like the “Congressional Left,” “Intellectual Left” and “Hollywood Left,” many of which are overrepresented by Jews. Of the 22 people listed in the “Cultural Left,” a full 10 are Jewish, including Al Franken, Tony Kushner, and Norman Mailer. Other Jews blamed for Al Qaeda’s attack include Soros, Noam Chomsky and Barbra Streisand.