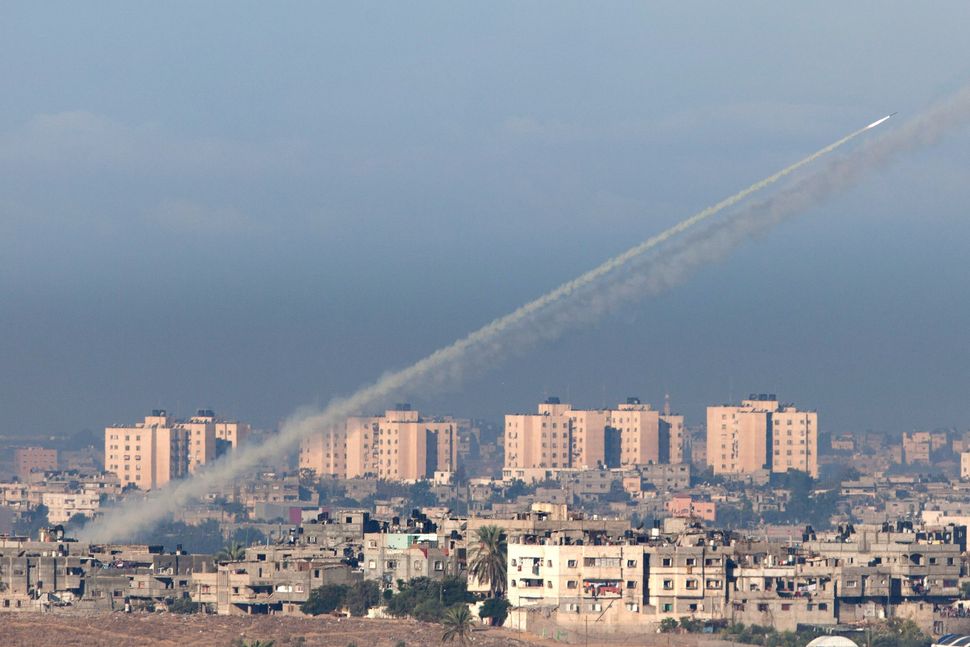 Rockets fired from Gaza in 2012. Image by Getty

JERUSALEM (JTA) — Residents of southern Israel spent the night running to bomb shelters and safe rooms as some 45 rockets and mortar shells were fired from Gaza.

The rockets were fired early Wednesday morning beginning about an hour after Israel Air Force jets fired on three military targets in a Hamas compound in the southern Gaza Strip “in response to the repeated launching of incendiary kites and balloons with explosive devices attached to them from the Gaza Strip into Israeli territory,” the IDF Spokesmen’s Unit said.

At least six of the rockets fired from Gaza landed inside Israeli communities near the border, including one that landed inside the courtyard of a kindergarten building. The rest landed in unpopulated areas of southern Israel.

The Israel Defense Forces responded to the rocket and mortar attacks by firing on 25 terror targets in Hamas military bases throughout Gaza, the IDF said in a statement.

The IDF in the statement accused Hamas of “targeting Israeli civilians throughout the night with a severe rocket attack and dragging the Gaza Strip and its civilians down a deteriorating path and an escalation” of the conflict.

Hamas in Gaza in a statement called its shooting of rockets at southern Israel “a legitimate right. The message of the shelling is to confirm that the resistance is determining the rules of engagement and will not allow the enemy to impose any new equations,” referring to Israel’s new policy of firing on Hamas targets in Gaza in response to the incendiary kites and balloons.

Early on Wednesday afternoon, the IDF fired on a group of Palestinians launching arson balloons from the southern Gaza Strip.