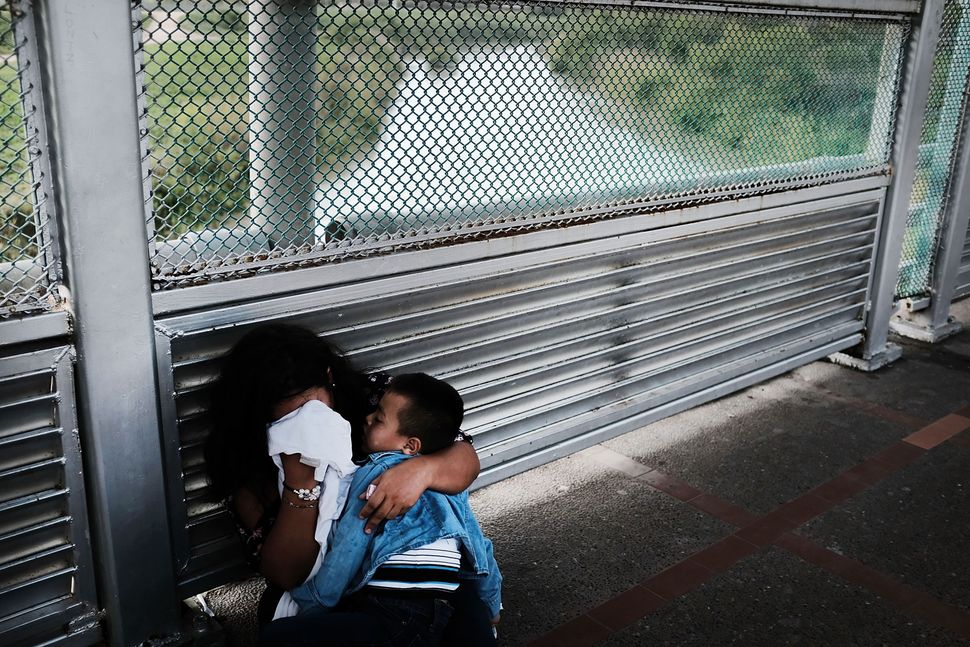 A crying Honduran woman and her child wait along the border bridge after being denied into the Texas city of Brownsville. Image by Getty Images

A website projecting white-nationalist claims of “genocide” and a “Holocaust” being perpetrated against white Americans is circulating the internet — more so after being mentioned at an official White House event, hosted by the president.

At an event Friday, President Donald Trump tried to flip the conversation from the treatment of migrant children at the border, bringing in “angel” moms and dads who are “permanently separated from their loved ones” killed by illegal immigrants, according to a Washington Post op-ed. Those angel parents believe that illegal immigrants commit crimes in greater proportion than native-born Americans, as evidenced by resources like the Illegal Alien Crime Report.

One mother, who was on stage with Trump, brought up the report, telling people they will be “sickened” if they saw “the magnitude of crimes being committed against your fellow Americans by illegal aliens allowed to stay in this country.”

The Illegal Alien Crime Report’s Facebook page leads to a video called “American Holocaust,” featuring two of the parents who shared the stage with Trump and the person who runs Illegal Alien Crime Report, Dave Gibson. The group called it a “stirring video on the ongoing genocide being committed by illegal aliens and the U.S. politicians who encourage and protect them.”

In the video, Gibson claims that “we have a 9/11 in this country every three years,” because of people killed by illegal immigrants. It cuts to footage of Nazis’ victims, corpses in concentration-camp uniforms lined up and in piles.

“The difference between the American Holocaust and the Holocaust that took place in Germany is that, in Germany, the government rounded up the people and had them murdered,” said Frank Jorge, the Cuban-born video-maker, on camera. “Here, it is done by foreigners . . . but behind it all, it’s our government.”