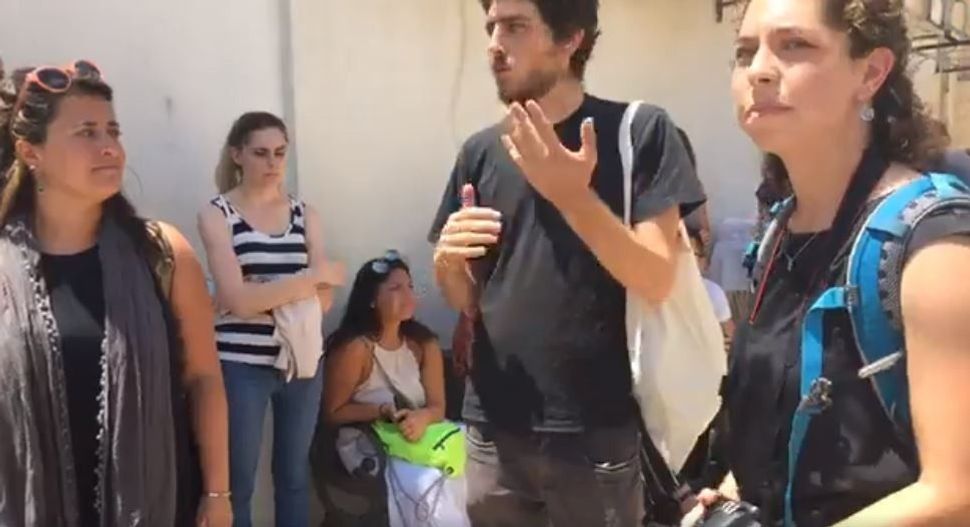 JERUSALEM (JTA) — A group of American Jews visiting Israel on a free Birthright trip walked off the tour during a visit to the City of David in Jerusalem to visit a Palestinian family who is facing eviction from their eastern Jerusalem home.

Six of the young people came from one Birthright tour and two joined them from a second group in the Sunday walk off.

One of the members of the group who walked off the tour live streamed the event on Facebook, including interviewing each of the members about their reasons for leaving Birthright.

The group, guided by Hagit Ofran of Peace Now, visited the Sumreen family whose home in eastern Jerusalem is managed by Elad, which also runs the City of David national park. Elad is expected to settle a Jewish family in the home if the Palestinian family is evicted. After Israel declared the family home absentee property upon the death of the family patriarch, the house was sold to the Jewish National Fund, which is seeking the family’s eviction, according to Haaretz. The Sumreen family was unable to prove to an Israeli court that it owned the property.

The tour guide with six of the young Jews who left their Birthright group explained to them that they were free to go but that they could lose their deposit for the free trip, that Birthright could decide to charge them for the entire trip, and that they may have to pay to change their return flight.

Those who leave a Birthright tour cannot rejoin it. The eight who left their groups on Sunday planned to visit other places in eastern Jerusalem and the West Bank, including the Khal al-Amar Bedouin village that is planned to be demolished and a tour of Hebron with Breaking the Silence, Haaertz reported.

It is the second group of young Jews to walk off a Birthright trip in the last two weeks. On June 28, five women affiliated with the IfNotNow, a left-wing millennial Jewish group, walked off the last day of their Birthright trip to join a tour of the West Bank city of Hebron with Breaking the Silence.