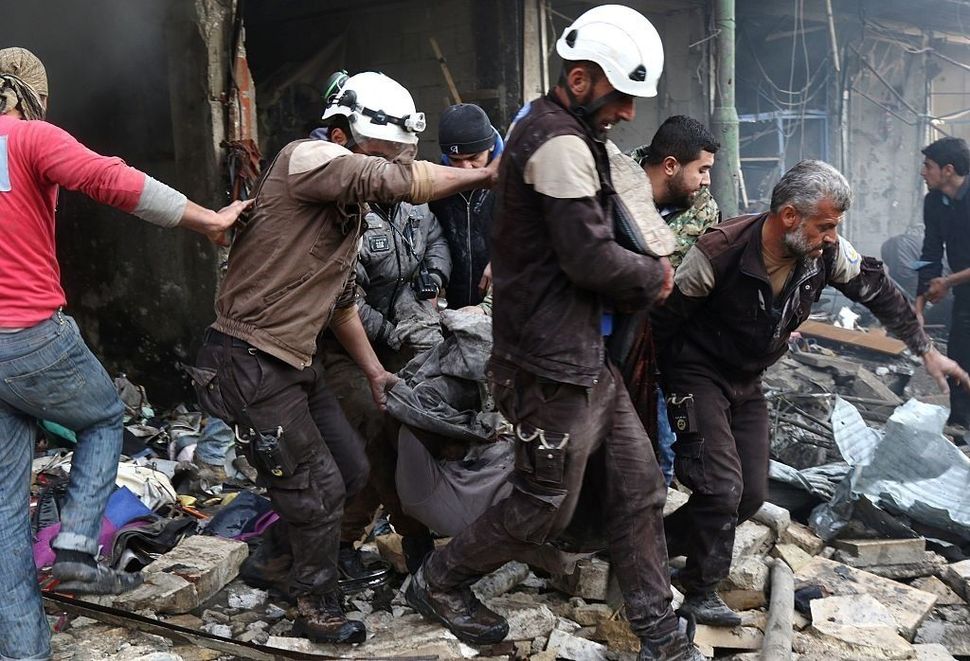 Syrian men and civil defense volunteers, also known as the White Helmets, evacuate a victim from a building following an air strike on the village of Maaret al-Numan, December 4, 2016. Image by MOHAMED AL-BAKOUR/AFP/Getty Images

JERUSALEM (JTA) — Israel rescued some 800 members of a Syrian humanitarian organization and their families from southern Syria.

The members of the Syrian Civil Defense, more commonly known as the White Helmets, were evacuated overnight Saturday and transferred through Israeli to Jordan, according to Reuters.

“Following an Israeli Government directive and at the request of the United States and additional European countries, the IDF recently completed a humanitarian effort to rescue members of a Syrian civil organization and their families,” the IDF said in a statement.

The statement said that the Syrian civilians were evacuated from the war zone in southern Syria “due to an immediate threat to their lives.” The IDF said that the “transfer of the displaced Syrians through Israel is an exceptional humanitarian gesture.”

“The civilians were subsequently transferred to a neighboring country. Israel continues to maintain a non-intervention policy regarding the Syrian conflict and continues to hold the Syrian regime accountable for all activities in Syrian territory,” the statement said.

A Jordanian foreign ministry spokesman confirmed to Reuters that the civilian workers were transferred to his country.

Jordan agreed to a request by Britain, Germany and Canada to give the White Helmet workers temporary asylum until they can be settled in western countries on humanitarian grounds, the spokesman said.

The operation reportedly began at 11 p.m. on Saturday and concluded by 6 a.m. on Sunday.

The White Helmets, a group of some 3,000 volunteers sponsored by other humanitarian groups in the United States and Canada, provides search and rescue services in response to bombing and evacuations of civilians from danger areas, and also provide food, psychological support and other assistance. The group says it has

The White Helmets are sponsored by humanitarian groups mainly in the United States and Canada and works in Syria to provide food, psychological support and other assistance. The group says it has saved over 114,000 lives and has lost the lives of 204 White Helmet volunteers since its founding in 2014.

Israel’s army has been providing food, medical care, tents and clothing to the tens of thousands of refugees who have poured in to the border area amid the fighting in the southern part of their country between troops loyal to Syrian President Bashar Assad and rebel forces, as part of Syria’s seven-year civil war in which approximately 500,000 people have died. But Israel has said it will not allow the refugees to enter Israel. Israel has remained largely neutral in the war in Syria, which is largely fought along sectarian lines.