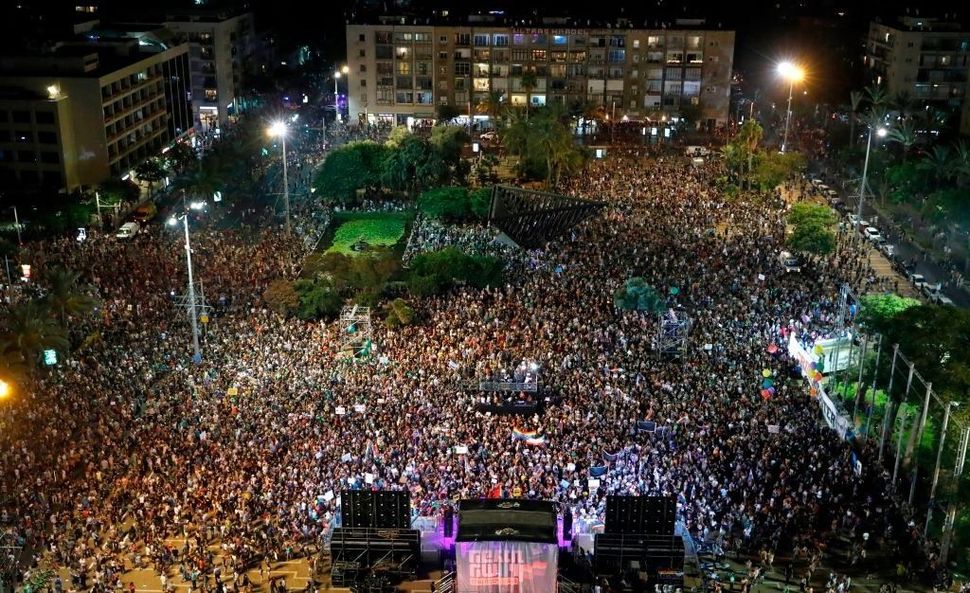 Participants attend a demonstration in Tel Aviv on July 22, 2018, to protest a new surrogacy law that does not include gay couples. The Knesset had earlier in the week approved surrogacy for single women or those unable to bear children — without granting the same right to same-sex couples or single men. Image by JACK GUEZ/AFP/Getty Images

An estimated 60,000 people attended a rally in Tel Aviv’s Rabin Square on Sunday evening, capping a day of demonstrations and a partial strike around the country in support of equal rights for Israel’s LGBT population.

The strike call and demonstrations were sparked by the amendment to the surrogacy law and Prime Minister Benjamin Netanyahu’s actions — saying Monday that he supports surrogacy for single fathers, but voting Wednesday against an amendment that would have done that. But the wave of protest, gained momentum over the past few days, appears to go far beyond opposition to a specific law, relating more generally to what the protesters say is a deprivation of the rights of LGBT individuals in many aspects of life.

Addressing the Tel Aviv rally, Zionist Union Knesset member Itzik Shmuli, who is gay, said: “We will no longer be silent. This struggle is not only about the rights of the [LGBT] community but on the image of the country. This is the 21st century. People are not seated at the back of the bus because of the color of their skin and they will not be deprived of the right to be parents due to their [sexual] orientation.”

Earlier in Tel Aviv, protesters briefly blocked the southbound lanes of the Ayalon Highway. Two protesters were arrested in Jerusalem after they disrupted traffic in the city center. Protesters also briefly blocked main roads in Haifa and in Be’er Sheva. In the northern city of Afula, 200 people demonstrated.

Hundreds of protesters also demonstrated near the government offices in Haifa, and blocked Haatzmaut Street in the lower part of town carrying rainbow flags and banners reading “there is no equality, there is discrimination, bring down the government!” and “we won’t surrender, we will win.” Demonstrators also chanted slogans against Israeli Education Minister Naftali Bennett and the government.

Sympathy for the protest was exceptionally widespread. Hundreds of employers announced that they would allow employees to observe the strike without penalty. The Histadrut labor federation expressed its support, and various companies published advertisements in support.