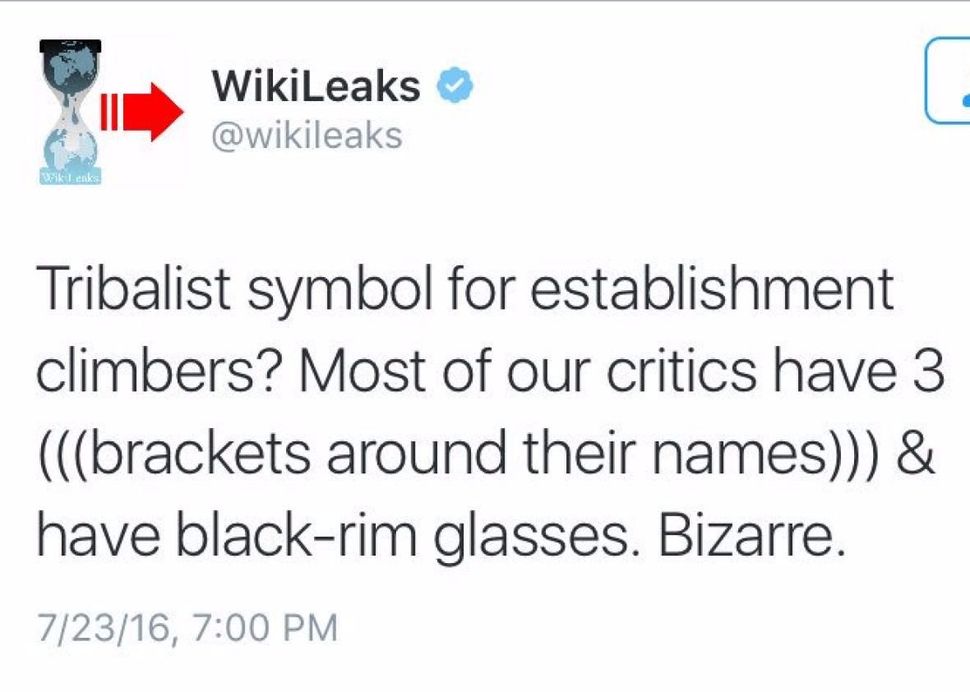 WikiLeaks tweeted an anti-Semitic remark following online criticism of its publication of tens of thousands of hacked DNC emails. Image by Twitter

Freedom of information activist Emma Best has published over 11,000 private Twitter messages between WikiLeaks and its supporters, which includes anti-Semitic messages sent from the WikiLeaks account, Vice reports.

The messages come from a group chat called “Wikileaks +10,” which indicates the number of supporters in the chat. In it, Wikileaks and the other accounts would “coordinate smear campaigns against the group’s rivals, including journalists,” according to Vice.

One journalist mentioned in the chats was Raphael Satter. Satter, who is Jewish, reported for the Associated Press on the damaging ramifications of Wikileaks’ Saudi data dump.. WikiLeaks took to the group DM exchange to comment on Satter after his story was published:

The message appeared to be referring to echoes, which had been utilized by neo-Nazis on Twitter to identify Jews. Prominent Jewish figures on Twitter then began to ironically utilize the echoes in an attempt to reclaim them.

Just a month before WikiLeaks sent those direct messages, it elicited accusations of anti-Semitism on Twitter after using echoes to identify its critics.

“Tribalist symbol for establishment climbers? Most of our critics have 3 (((brackets around their names))) & have black-rim glasses. Bizarre,” the official WikiLeaks Twitter account tweeted at the time.

The tweet was eventually deleted. WikiLeaks denied charges of anti-Semitism, instead saying they were critiquing “social climbers” using the echoes.

The opposite. We criticised the misappropriation of anti-Nazi critiques by social climbers. Like Ice Bucket Challenge & ALS.