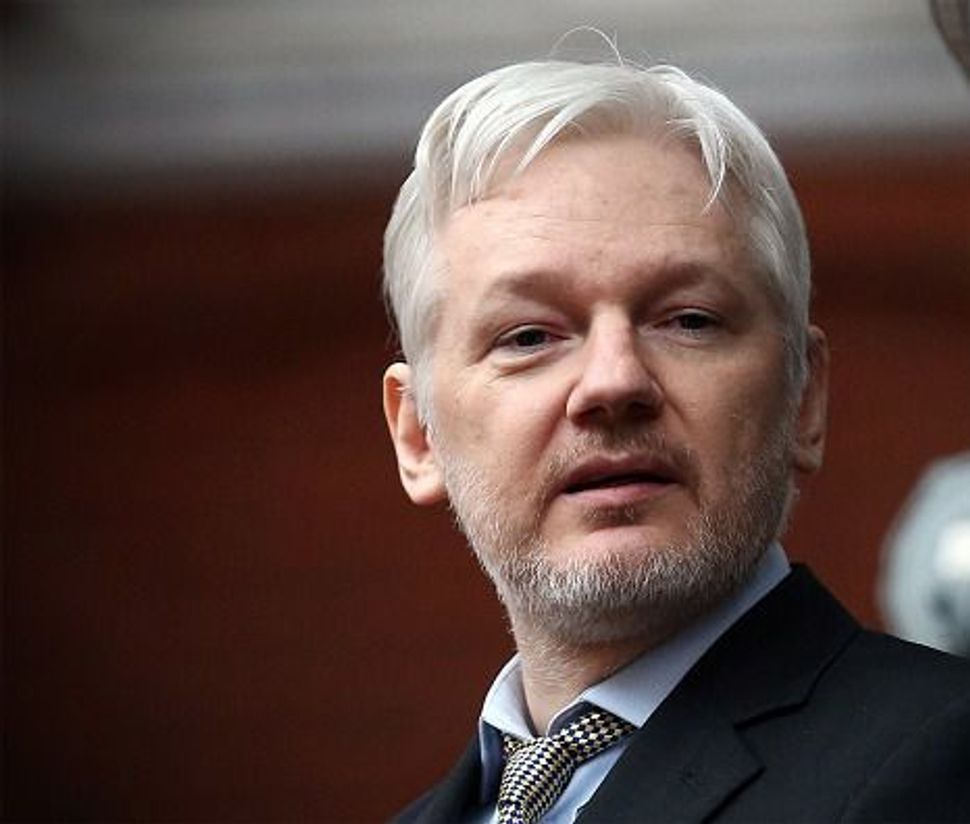 WikiLeaks is under fire for what some are calling anti-Semitic Tweet in response to online criticism of its publication of tens of thousands of hacked emails from the Democratic National Committee. 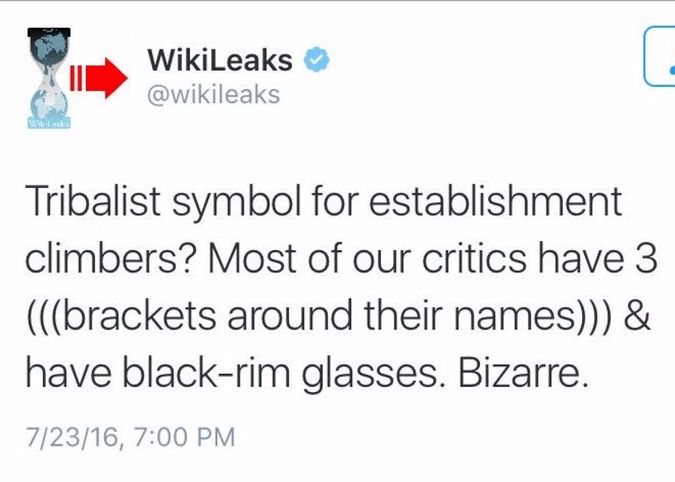 WikiLeaks tweeted an anti-Semitic remark following online criticism of its publication of tens of thousands of hacked DNC emails. Image by Twitter

“Tribalist symbol for establishment climbers? Most of our critics have 3 (((brackets around their names))) & have black-rim glasses. Bizarre,” the official WikiLeaks Twitter account tweeted Saturday.

The brackets, known as an echo, were originally used by anti-Semites online to identify Jewish names and organizations for harassment. In response, Jews and other anti-racist users and organizations appropriated the symbol in a show of unity against online hate.

Haaretz reporter Anshel Pfeffer directly called out WikiLeaks tweet as anti-Semitic, and noted that it wasn’t out of line for the organization.

WikiLeaks responded acidly to charges of anti-Semitism, claiming instead it was challenging establishment “social climbers” who joined in using the anti-racist symbol in order to show they were hip to the trend rather than intent on fighting anti-Semitism online.

Jonathan Greenblatt, the CEO of the Anti-Defamation League, re-shared the ADL’s resources on combatting the echo on Twitter in light of what he called WikiLeaks trivialization of anti-Semitism, drawing further clarifications from the document-dumping organization.

@JGreenblattADL The opposite. We criticised the misappropriation of anti-Nazi critiques by social climbers. Like Ice Bucket Challenge & ALS.

Ironically, the WikiLeaks anti-Semitic misstep comes amid tumult over the organization’s revelations of DNC emails suggesting attacks on Sen. Bernie Sanders based on his Jewish faith or perceived atheism. Those bombshell revelations in turn led Rep. Debbie Wasserman Schultz, one of the most prominent Jewish lawmakers in Congress, to resign her post as chairwoman of the DNC and withdraw from speaking at the convention this week.

The so-called #DNCLeak has already severely impacted this week’s Democratic National Convention. Several emails, which highlighted efforts by the DNC to tip the Democratic primary in favor of Hillary Clinton over Sen. Bernie Sanders, confirmed for Sanders supporters their suspicions that the Democratic party was working against their candidate. At a meeting with her home-state delegation Monday, Wasserman Schultz was booed and effectively forced off stage by Sanders supporters.

However, many have criticized WikiLeaks online for failing to strip the emails of sensitive personal information, like addresses, social security numbers and passport numbers. On Twitter, WikiLeaks claimed this was intentional to allow for “investigative journalism,” but one Twitter user claimed a quick search turned up credit card numbers and enough information for identity theft.

@rcosgrove Yes. And those are important for investigative journalism. But what you do not see is “Tons of credit card numbers”

The DNC hack, which U.S. officials told CNN Monday the party had been warned about months before it attempted to fix the issue, has spurred speculation by Democratic party leaders and cybersecurity experts that state-sponsored Russian hackers may be attempting to influence the U.S. elections. The New York Times cited experts pointing to email metadata in Russian and other clues that seem to indicate Russian intelligence agencies performed the hack. Additionally, doubts have been raised about the supposedly Romanian hacker, named Guccifer 2.0, who claimed responsibility for the hack.

However, WikiLeaks founder Julian Assange told NBC News Monday that there is “no proof” that the hacked emails came from Russia, and on Twitter the organization even implied that its source and the hacker may not be the same individual.

The organization also promised that it had more DNC emails that would be leaked in the near future.

@Rob_Hoffman We have more coming.