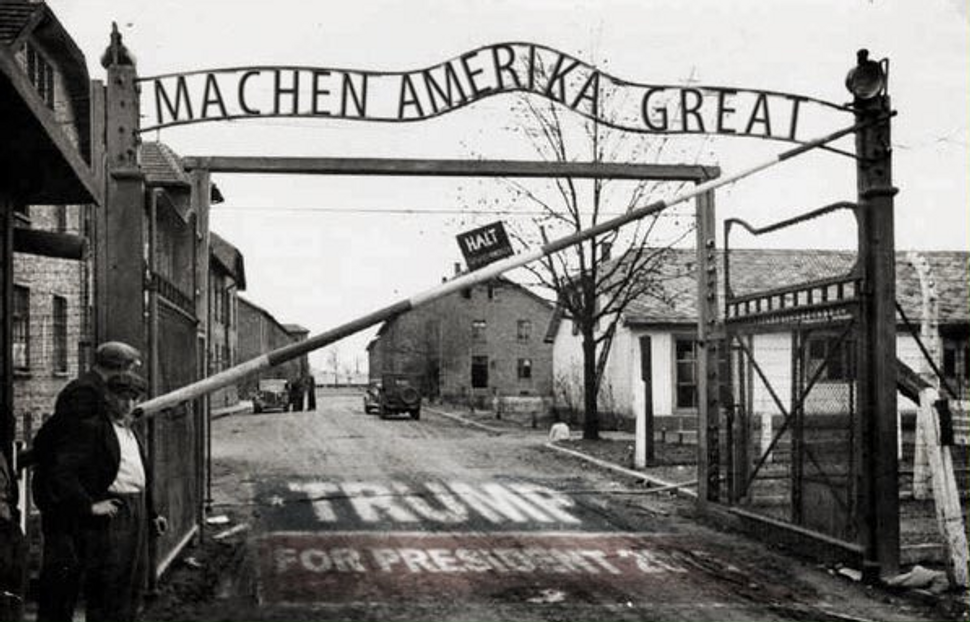 When news broke about the anti-Semitic marker being used to identify Jews on Twitter — a sequence of three parentheses called “echoes” — the symbol was added to the Anti-Defamation League’s hate speech database within days. Many Jews, and even some non-Jews, immediately began putting the echoes around their names as an act of defiance. I did it, too.

I kept the echoes on for several days before they began to make me uncomfortable. I noticed that I’d gone from feeling proud of another defiant Jew whenever I saw the echoes to feeling just, well, aware of another Jew. The echoes went from being a way to give the finger to white supremacists and anti-Semites to being a way to identify other members of my tribe. They’d become a sly way for Jews to identify each other in the multi-tribal cyberspace arena — a kind of cyber-kippah, a type of digital tzitzit, which the average internet dweller would probably not recognize or understand. When I saw the echoes I would think, “Ah, a fellow Jew” and a feeling of tribal affection would spring up where none had been before.

If I were an Orthodox Jew, or even a certain kind of non-Orthodox Jew, this would not be problematic at all. It would be a manifestation of Ahavas Yisroel, the love owed one’s fellow Jews in light of our shared covenant. For the record, I do believe the reaction of love and friendship is appropriate when I see another Jew acting on the Jewish values that I also cherish. Yet the echoes by themselves do not communicate any shared values, they simply communicate Jewishness, which in today’s world is merely an indicator of a shared identification, historical background, some genes. This sort of tribalism makes me squeamish precisely because Jews have so often suffered at the hands of other peoples’ tribalist, discriminatory or chauvinist ideas.

I was musing on this when I saw a now-deleted WikiLeaks tweet, retweeted by Yair Rosenberg, a senior writer at Tablet and self-proclaimed Twitter sheriff. In it, WikiLeaks asks, “Has this ((anti-anti-semitic jesture))) been re-purposed to now be a triballist designator for establishment climbers & not anti-racism?”

The irony of the WikiLeaks tweet is almost painful. Jews put echoes around their names to own, reclaim or reappropriate a symbol being used to direct hatred toward them, and WikiLeaks asks if the symbol is now being used to allow Jews to identify each other in their quest to be “establishment climbers,” which I take to mean insinuating ourselves into the halls of power, a classical anti-Semitic narrative. Wow.

It struck me that this comment is rooted in the same type of logic as that used by All Lives Matter protesters. A “sub-group” (in Steve King’s memorable phrase) defends itself, and the self-defense is then interpreted in terms of aggression.

WikiLeaks followed up the first tweet with a second (also now-deleted) tweet asking why “most” of their critics had echoes around their names and wore black-rimmed glasses — translation: why most of their critics are Jews! 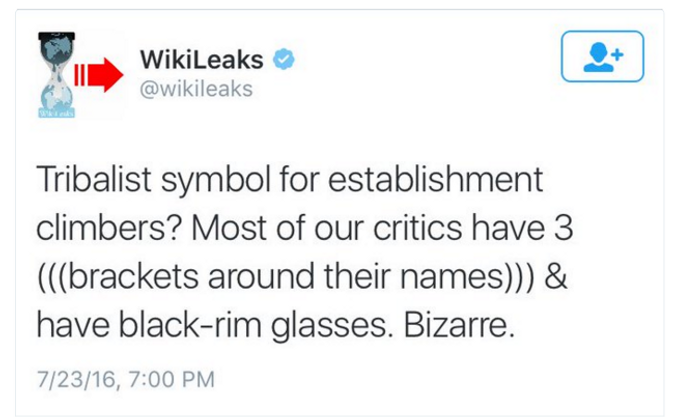 My reaction to my own discomfort over the echoes had been to remove them from name. My reaction to WikiLeaks was to put them back on again.

WikiLeaks has since denied that its tweets were anti-Semitic, and yet it has also defended the decision to delete them, explaining that they’d been purposely misinterpreted by “pro-Clinton hacks and neo-Nazis.” But the whole thing is pretty unconvincing.

In a world without anti-Semitism, I think my initial sense of discomfort over the echoes would be justified. If Greeks or Nigerians, say, were using an obscure symbol to identify each other on Twitter, I think it would make me uneasy, too. As things stand now, though, with the state of anti-Semitism in the world today, I’ll keep the echoes on — and (((screw you, WikiLeaks.)))

Matthew Gindin is a freelance writer, journalist and lecturer located in Vancouver, BC. He has been published in the Forward, Tikkun, All That Is Interesting, and elsewhere, and regularly writes for the Jewish Independent. He can be found on Medium and Twitter, and blogs at “Seeking Her Voice”.