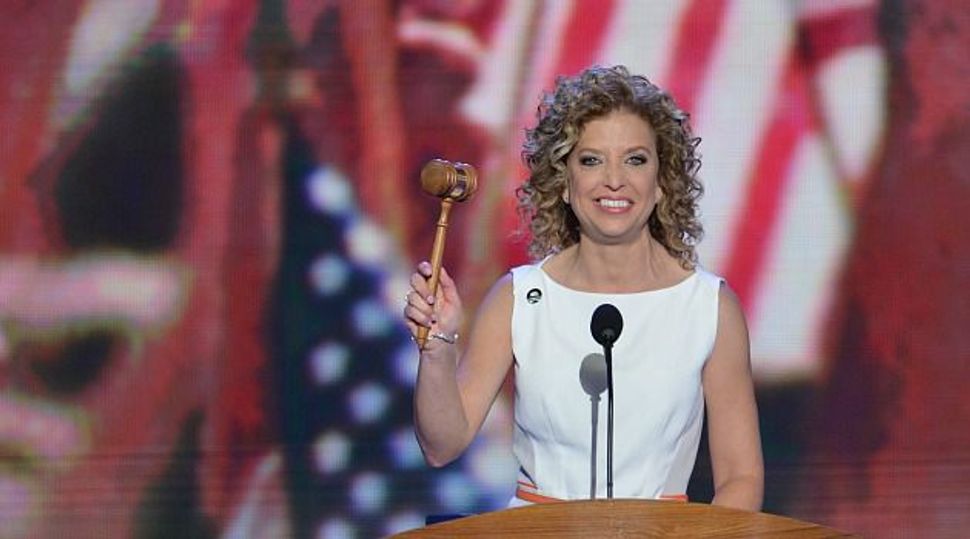 Convention Kingmaker: Debbie Wasserman Schultz wields the gavel at the Democratic National Convention. Despite some grumbling about her style, the DNC chair has steered a successful path toward the November election. Image by getty images

Debbie Wasserman Schultz was forced to resign the chairmanship of the Democratic National Committee over an email smear scandal — throwing the party into disarray just 24 hours before it convenes in Philadelphia today for its national convention.

The Jewish Florida congresswoman, a onetime rising star in Democratic politics, was pushed out following a Wikileaks email dump which revealed that the DNC played favorites in the Democratic primary race, expressing preference for Hillary Clinton over her rival Bernie Sanders. The Sanders campaign has long claimed that the DNC did not maintain the needed impartiality and had called for the replacement of Wasserman Schultz as chair. The DNC emails, posted online over the weekend, reinforced this call and upended attempts to unite the party and reach understandings between the Clinton and Sanders camps.

“Going forward, the best way for me to accomplish those goals is to step down as Party Chair at the end of this convention,” Wasserman Schultz said in the statement she released after talking to Clinton and to President Obama. Her resignation will take effect Friday. Wasserman Schultz insisted she would open and close the convention as planned. “I will address our delegates about the stakes involved in this election not only for Democrats, but for all Americans,” she said. Some Democrats now fear that her speech will provoke harsh responses from Sanders delegates and could draw negative attention to the Democratic convention.

Donna Brazile, a long time Democratic operative and DNC vice chair, will take over for Wasserman Schultz until a new chair is appointed.

Despite accusations of being in the tank for Clinton, Wasserman Schultz has long had a bullseye on her back among some supporters of the First Lady who reportedly viewed her as a political liability with limited upside.

Politico reported that John Podesta, Clinton’s campaign chairman who is also a former top adviser to President Obama, tried to have her dumped last year.

“It came down to the fact that the president didn’t want the hassle of getting rid of Debbie,” former top Obama adviser said.

Others saw more practical reasons for dumping Wasserman Schultz, including lackluster fundraising prowess and polls showing her to be one of the Democrats’ least effective talking heads.

This latest storm comes at the worst possible time for the Democratic Party. Democrats, who will kick off their convention Monday afternoon, were seeking to frame the event as a show of unity, showcasing the successful healing of wounds after a bruising primary race, and highlighting their party’s cohesion in contrast to the Republican discord on display last week in Cleveland. But the bias against Sanders, which became apparent after the email release, delivered a major setback to these attempts and revived old fractures and reignited claims from the party’s progressive wing that the system is rigged against them.

Wassermann Schultz and Sanders are the Democratic Party’s most visible and prominent Jewish figures, and it was an offensive email referring to Sanders’ Jewish faith that unleashed the series of events which led to Wasserman Schultz’s resignation. “It might [make] no difference, but for KY and WVA can we get someone to ask his belief. Does he believe in a God” DNC staffer Brad Marshall, who is also Jewish, suggested in an email to the DNC communication team. “He had skated on saying he has a Jewish heritage. I think I read he is an atheist. This could make several points difference with my peeps. My Southern Baptist peeps would draw a big difference between a Jew and an atheist.”

Marshall later apologized for the email and said the comments did not reflect his beliefs or the beliefs of the DNC.

“It’s highly ironic that the most senior Jewish party member was done in by another Jewish staffer playing the Jew-card against the first potential Jewish presidential nominee,” a DNC source told the Forward on Sunday, hours after Wasserman Schultz resigned. The source, who was not authorized to speak on the record, noted that Wasserman Schultz’s leadership role was a source of pride to the Jewish community. He said that reading the emails “was really disappointing” for many at the DNC, who “though we were better than that.”

The relationship between Wasserman Schultz and Sanders deteriorated as the primary race progressed and as the Vermont senator emerged as a real threat to Clinton. In May, Sanders took personal aim at Wasserman Schultz by endorsing her rival in the Florida Democratic primary race. The DNC chair brushed off accusations from the Sanders campaign that decisions she had made were meant to tilt the balance in favor of Clinton and to add obstacles to Sanders’ outsider campaign.

“Not only is there nothing rigged about it, the candidates were both aware what the rules were and that we have scrupulously adhered to them,” Wasserman Schultz told the Forward in a May 31 interview. “I’ve been neutral throughout this primary, the Democratic National Committee has been neutral throughout this primary, and we will continue to be neutral.”

In a statement released Sunday evening, Sanders said that “Debbie Wasserman Schultz has made the right decision for the future of the Democratic Party.”

Wasserman Schultz is not resigning her congressional position and will run for reelection this year. During her years in the House of Representatives, she has been active in promoting Jewish issues and was the co-author of the legislation establishing an annual Jewish heritage month. In interviews and speeches she frequently pointed to her Jewish heritage and beliefs as driving her work and guiding her decisions.