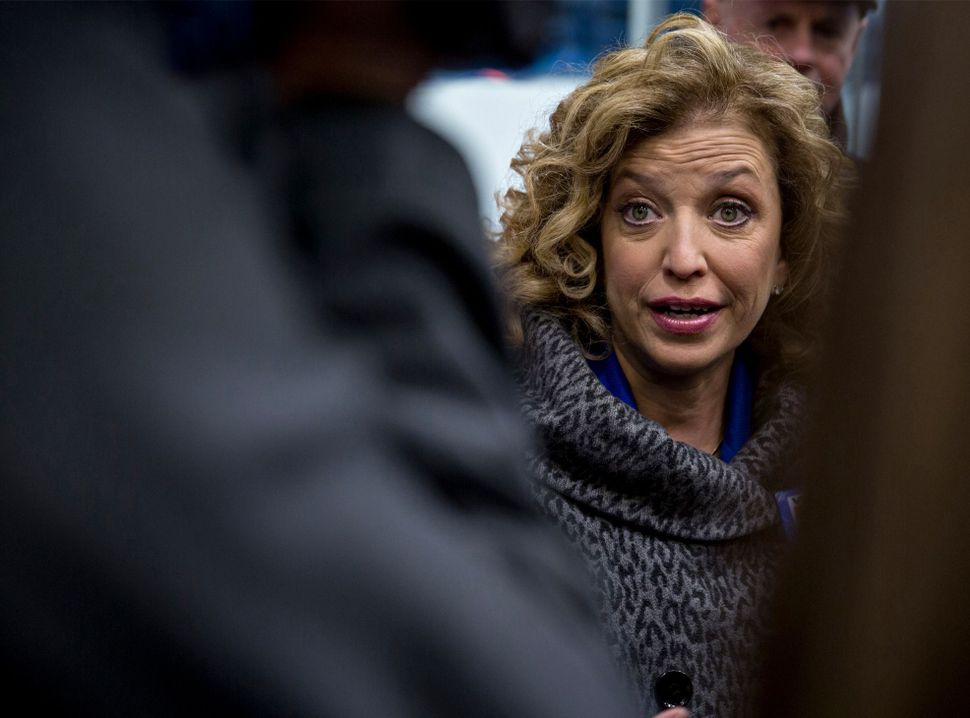 In a career full of achievement — a seat in the House of Representatives, chair of the Democratic National Committee and captain of the House women’s softball team — Congresswoman Debbie Wasserman Schultz hit yet another milestone recently: She became a Saturday Night Live punch line, and in the season finale’s much-lauded cold open, no less.

“I know, it’s so rigged,” says the Hillary Clinton character played by Kate McKinnonas of the Democratic primary process as she sits at the bar next to Larry David in the role of Clinton’s rival for the Democratic presidential nomination, Bernie Sanders.

“To Debbie,” she replies.

The skit says a lot about Wasserman Schultz’ situation right now. One of the most prominent Jewish politicians in America, she’s never been so powerful, or so vulnerable.

Sanders wants her out of both jobs.

The DNC chair should bring the party together, Jeff Weaver, Sanders’s campaign manager, told the Forward.

“What we’ve seen repeatedly from chairperson Wasserman Schultz is that’s really not the role that she’s playing,” he said.

In other words, that toast to Debbie from Sanders’s doppelganger? It was just a joke.

The tumultuous nature of the Democratic Party’s primary race has put Wasserman Schultz in the position of the party’s official lightning rod. As DNC head, she sits between Clinton and Sanders. But Wasserman Schultz is identified with Clinton. She’s more of a pragmatist, like Clinton, and not a populist in the Sanders style. And Wasserman Schultz is a longstanding, outspoken supporter of Israel, while Sanders’s pet foreign policy issue is his desire to raise awareness of the Palestinian cause.

Sanders has already made clear he does not want Wasserman Schultz to continue leading the party on the grounds that she rigged the party’s primaries in favor of Clinton.

As the DNC chair, Wasserman Schultz is entrusted with raising funds, supporting the party’s candidates and managing the primary process, based on the party’s rules. The latter has turned into a source of contention between the DNC chair and Sanders. His campaign has taken issue with the party’s policy of allowing closed primaries in which only registered Democrats can vote, leaving out independents who lean toward Sanders.

Wasserman Schultz and the DNC rejected these claims, noting that primary rules were set back in 2014, before the race began and before Sanders joined the party and decided to run for the nomination.

“Not only is there nothing rigged about it, the candidates were both aware what the rules were and that we have scrupulously adhered to them,” Wasserman Schultz told the Forward in a May 31 interview. “I’ve been neutral throughout this primary, the Democratic National Committee has been neutral throughout this primary, and we will continue to be neutral.”

Other complaints touched on the DNC’s choice of scheduling debates on weekends and early in the race which they claim gave Sanders a disadvantage, and setting up a joint fundraising operation with Clinton, a common practice in presidential races but one that has irked Sanders’ campaign.

“She was chosen for the job because of her tenacity and fierceness in defending Democratic values,” said Greg Rosenbaum, chair of the National Jewish Democratic Council and a longtime Democratic activist who opposes attempts to change the primary rules. “Those who are now calling her an ‘attack dog’ forget that this is her job as DNC chair.”

Sanders is also supporting a candidate, Tim Canova, who’s running against Wasserman Schultz in her own primary. Sanders, who initially rejected calls to raise money for other candidates, launched in April a fundraising effort for a handful of progressive candidates, including some running in primary races against establishment Democrats.

“It seems like a big challenge, but not one she cannot win,” said University of South Florida political scientist Susan MacManus. She noted that Wasserman Schultz’s reelection race is “closer than ever before” but that her views are basically “in synch with her voters and with the party.”

Canova’s is the first primary challenge Wasserman Schultz has faced since her first run for the Florida State House in 1992.

She ran for that office while working for Peter Deutsch, like Wasserman Schultz a Jewish transplant from New York, who was leaving it to run for Congress. She won his seat; he won a spot in the House of Representatives. Then, when Deutsch launched a Senate bid in 2004, she ran for his House seat and won it. Deutsch, who after loosing his race for the Senate retired from politics and moved to Israel, is largely viewed as Wasserman Schultz’s mentor. Jews make up an estimated 15% of the electorate in her current district, Florida’s 23rd.

A breast cancer survivor who struggled with the illness as a congresswoman, Wasserman Schultz has taken on the issue forcefully and has advocated for early detection and treatment.

Many of the issues she has fought for in Congress fit the classic Jewish notion of repairing the world: healthcare, social justice, and women’s rights.

“I’ve made policy decisions through a distinctly Jewish lens because my values are informed by my Judaism — the idea of tikkun olam, repairing the world,” Wasserman Schultz said. “Growing up we were told by my parents around the dinner table how important it was to give back because we were fortunate, and I really made tikkun olam a career choice.”

Wasserman Schultz and Arlen Specter, the late senator, sponsored the legislation that created National Jewish Heritage month, marked by a presidential proclamation every May.

“These are older Roosevelt New Deal Jews who look at her as their granddaughter,” said Ron Klein, a former Florida congressman who has known Wasserman Schultz since the two got first elected to the Florida House in 1992.

Wasserman Schultz’s hometown crowd loves her, but even before the clash with Sanders, she’s been on the hot seat.

As DNC chair she came under fire from Republicans for suggesting they want to “end Medicare as we know it,” and to “drag us all the way back to Jim Crow laws,” and rumors following the previous election cycle suggested members of Obama’s close circle wanted to replace her as DNC chair because they believed her harsh style was not effective. Wasserman Schultz came out unscathed from all these attacks, establishing her role as the most powerful person within the party operation. And in the summer of 2015, Wasserman Schultz faced intense pressure over the Iran nuclear deal.

A staunch supporter of Israel and strong ally of the American Israel Public Affairs Committee, the debate last summer over the Iranian nuclear deal strained Wasserman Schultz’s relationship with the pro-Israel community.

“My decision on the Iran agreement was the most difficult and gut-wrenching decision that I had made in my legislative career,” Wasserman Schultz said. Before deciding to side with President Barack Obama and support the deal, she spent hours in consultations and sought political backing from Vice President Joe Biden, who travelled to her district to meet with Jewish leaders.

“I was obviously disappointed by the vote of congresswoman Wasserman Schultz,” said Bruce Levy a former chair of Broward County AIPAC who was also a member of the lobby’s national council. “But I do not judge a member of congress by one vote.”

And Wasserman Schultz made sure her constituents know that while they may be divided over the Iran deal, it’s not the end of the road for her relationship with the pro-Israel community. On the contrary, she reached out to activists and members of the Florida Jewish community, vowed to be active on enforcing the deal and swore Iran wouldn’t get a free pass. “I believe her commitment to make sure we don’t take our eye off the ball is a true commitment,” Levy said.

Canova, her rival in the Democratic primary race, has taken issue with Wasserman Schultz’s decision to support the Iran deal, telling Jewish voters in the district the deal was dangerous and should not have passed.

In order to ensure her primary win, Wasserman Schultz needs to “come home a lot and remind people why they love her,” said MacManus, the University of South Florida political scientist.

The last Jewish politician to reach a senior leadership position paid a heavy political price for focusing on national politics instead of on his own district. Eric Cantor, who was the Republican Majority Leader and mentioned as a future potential House Speaker, lost his primary race in 2014 due to what most analysts believe was a negligence of local issues. Wasserman Schultz is determined not to let that happen to her.

“I made sure that I am a regular presence in my district, that I’m a constant presence in my children’s life, which is the most important thing, and that I can make sure we can elect Democrats up and down the ballot.”

Helping Wasserman Schultz out in this balancing act, she said, is Steve Schultz, her husband of 25 years. “I like to call him St. Steve. He will be the first Jewish saint, I’m sure of that,” she said. Her parents living down the street in Weston, Florida, also lend a hand. Her twins are now getting ready to go to college, and the Wasserman Schultz’s youngest daughter just celebrated her bat mitzvah.

Wasserman Schultz will not discuss her future plans. Her focus, she said, is only on getting the Democratic nominee into the White House and helping win congressional races.

But observers have longed marked the Florida firebrand congresswoman, known to never shy away from a fight and accused by her critics of being abrasive at times, as a likely contender for future leadership positions. Her DNC job has prevented her for running for the Florida senate seat that Marco Rubio will vacate in November. She could wait to see if the state’s other senator, Bill Nelson, runs again when his term ends in 2018, but many see her moving up in the House instead.

The DNC chairmanship has no term limit, but if a Democrat wins the White House, they will probably move to install a new chair for the party.

“She’s always wanted to grow, and if she becomes the first Jewish woman Speaker of the House that would be the pinnacle of her goals,” said Klein.