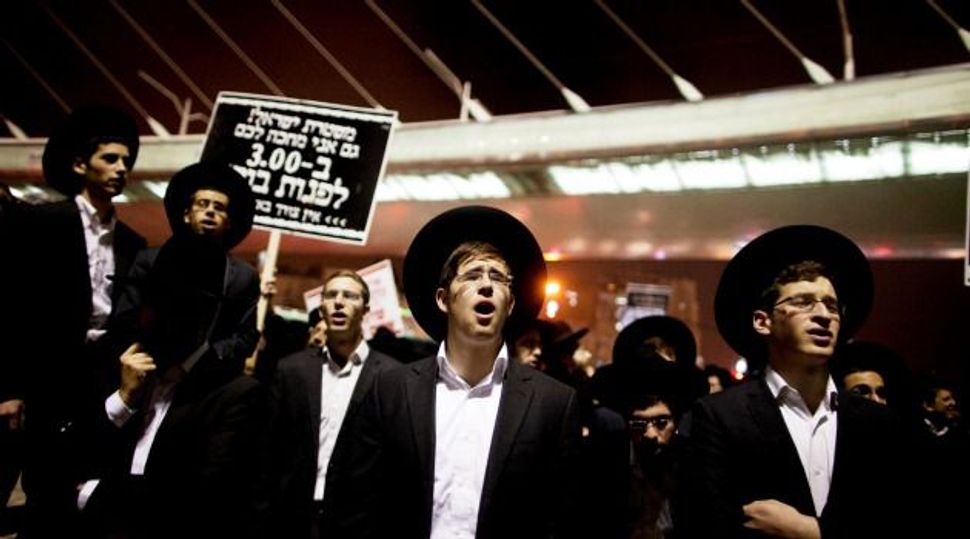 JERUSALEM (JTA) — More than 40 haredi Orthodox protesters were arrested in Jerusalem during a demonstration against the arrest of a yeshiva student who refused to register for the draft.

The demonstration on Thursday morning closed an intersection near the entrance of Jerusalem.

Police and some of the estimated 400 protesters clashed during the demonstration, which also stopped the Jerusalem light rail on Jaffa Road. The demonstrators shouted “We will die before we enlist,” Ynet reported.

The demonstration that closed Jerusalem roads came a few hours before the start of the Jerusalem Pride Parade, that will close roads and bring out extra security.

While haredi Orthodox men studying in yeshiva are exempted from the draft, they are required to appear at an enlistment office to present evidence of their studies and sign a deferral. But some members of the community, including those associated with the Jerusalem Faction, a radical haredi group, refuse to even sign the deferral.

A bill setting military enlistment quotas for haredi Orthodox yeshiva students passed its initial reading in the Knesset at the beginning of July. The legislation requires that a minimum number of students serve in the military, or the government will reduce the annual budget allocation for their yeshivas. The target will increase each year for 10 years. It will likely be reintroduced when the Knesset returns from its three-month recess in October. The legislation could bring down the current government if the haredi Orthodox parties, which are part of the ruling government coalition, leave the coalition over it.