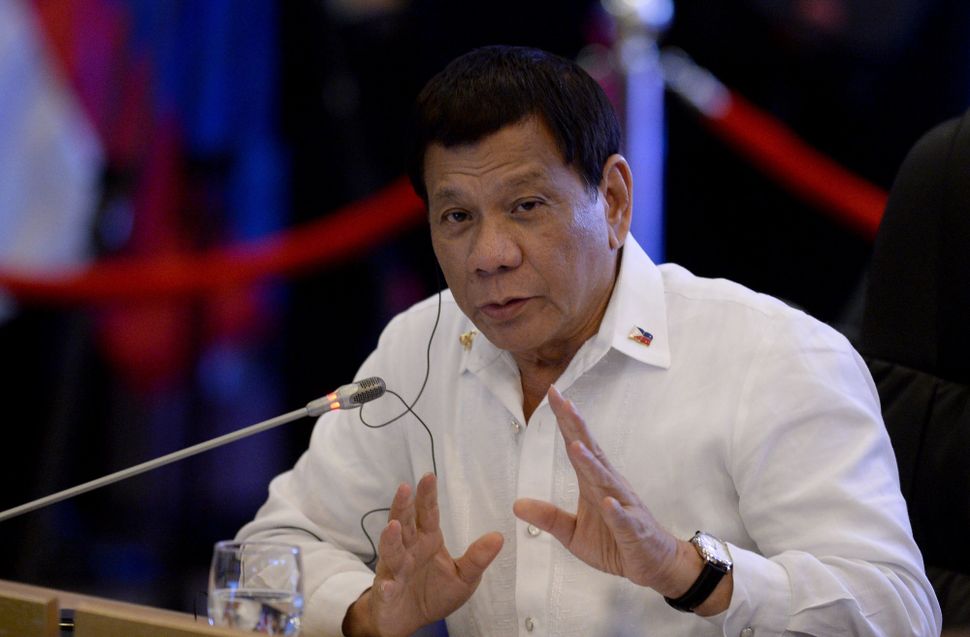 JERUSALEM (JTA) — Rodrigo Duterte, making the first visit to Israel by a president of the Philippines, will participate in the inauguration of a monument to Filipinos who rescued Jews during the Holocaust.

Duterte, whose four-day visit to the Jewish state begins on Sunday, will dedicate a memorial located in a park in Rishon LeZion, located near Tel Aviv in central Israel.

His trip will include a visit to the Yad Vashem Holocaust memorial museum in Jerusalem, as well as meetings with Prime Minister Benjamin Netanyahu and President Reuven Rivlin.

Israel and the Philippines established diplomatic ties in 1957.

Duterte, who has been president since 2016, in that year compared his campaign against drug dealers to the Holocaust, and said he would kill dealers like Hitler killed Jews, Haaretz reported.

“Critics compare me to Hitler’s cousin,” he said. “Hitler massacred 3 million Jews … there’s 3 million drug addicts. There are. I’d be happy to slaughter them.”

“If Germany had Hitler, the Philippines would have …,” he said and pointed to himself.

Duterte apologized for the Hitler comments during his October 2016 Rosh Hashanah speech at a synagogue in Manila. Following the apology, he talked about the quality of Israeli arms and asked the congregants to “Please, ask your people who are here to sell us arms.”

He is facing two complaints of murder and crimes against humanity in the International Criminal Court.