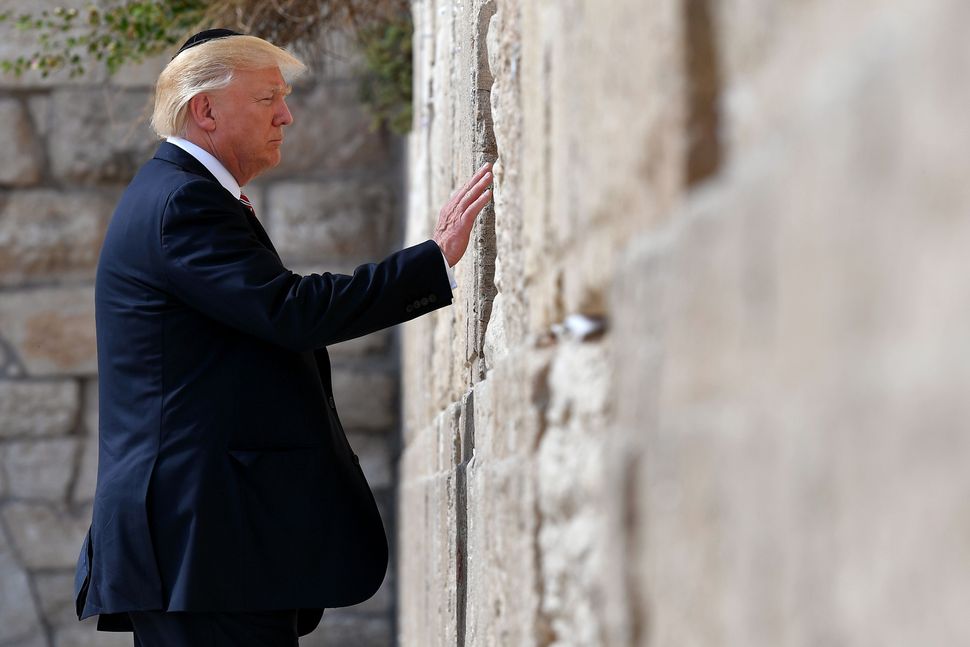 President Trump at the Western Wall, May 2017 Image by Getty Images

Invitations to the annual pre-Rosh Hashanah call the president holds with rabbis went out with less than a week’s notice, the Religion News Service reported.

The White House sent a save-the-date invitation to rabbis late Friday afternoon, according to an email forwarded to RNS.

“You are invited to join President Donald J. Trump and members of his Administration for a national conference call to celebrate the upcoming High Holy Days. The call will be held on Thursday, September 6, 2018 at 12:15 p.m. EST,” Amanda Robbins of the White House Office of Public Liaison wrote in the email. “Call-in details will be sent out next week. We look forward to talking with you!”

There was controversy surrounding last year’s call as well. After President Trump failed to formally disavow white supremacists in the wake of the violent rally in Charlottesville, leaders of the Reconstructionist, Reform and Conservative movements said they would not organize the call, as they had since the start of the Obama administration.

Instead, the White House initiated the call, which has been an annual occurrence since the Eisenhower era. It lasted about eight minutes, according to the Jewish Telegraphic Agency, and Trump didn’t take any questions. Past calls have lasted at least 45 minutes.

Hours before this year’s invitation arrived, the Religious Action Center of Reform Judaism, which skipped the call last year, told RNS that if there were a call, it would opt out again.

Rosh Hashanah, one of the holiest Jewish holidays, begins Sept. 9. The days leading up to the High Holidays is a notoriously busy time for rabbis.