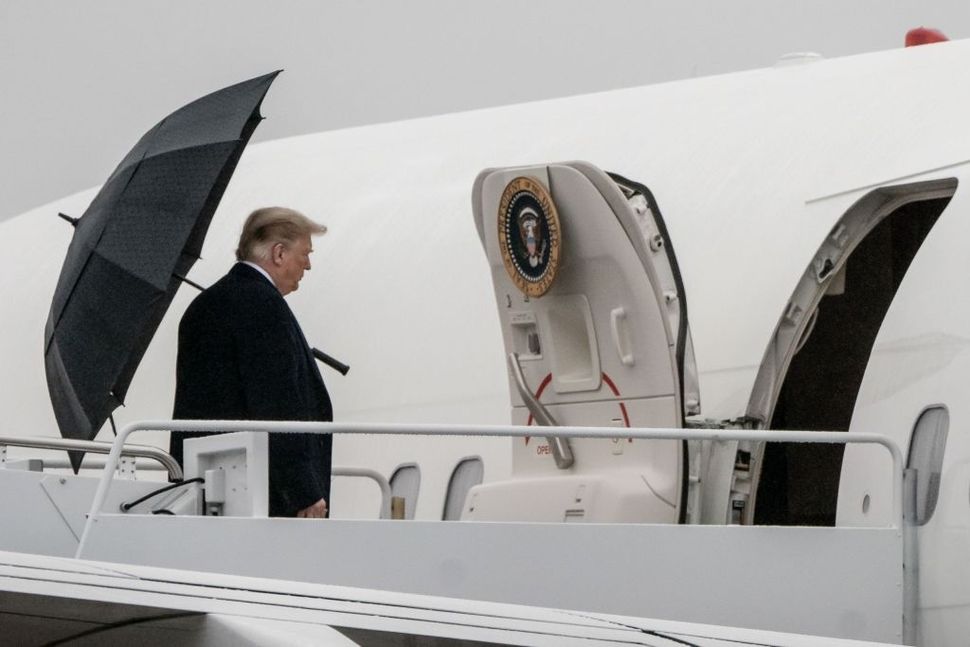 President Trump joked about his “bad hair day” after being forced to stop to talk to reporters in the rain about the Pittsburgh synagogue shooting in which 11 people were killed.

After briefly mentioning the shooting, Trump displayed a shocking lack of tact by quickly pivoting to his own appearance at an Indianapolis political rally.

Trump jokes that he considered cancelling speech to FFA not b/c of the mass shooting in Pittsburgh, but b/c his hair got wet while talking w/reporters about the shooting.

“At least you know it’s mine… I said, ‘maybe I should cancel this arrangement b/c I have a bad hair day.’” pic.twitter.com/wLIlqQpENj

Trump warned the crowd that he was not his properly coiffed self because the windswept Nor’easter wreaked havoc with his hair before he boarded Air Force One in Washington D.C.

The president said unnamed advisers had urged him to scrap the Indiana event and a later rally in Illinois out of respect for the dead and wounded in Pittsburgh.

But he said he rejected their advice because cancelling the political rallies would signal that the hate-filled gunman would have “won.” Trump then joked that the only reason he considered cancelling the rallies were because of his hair mishap.

He went on to tick off familiar GOP election talking points about trade and tariffs, which he claimed are benefitting American farmers.

Then he called two local Republican congressmen to the stage for rounds of applause, and derided House Speaker Nancy Pelosi.

Later, he took to Twitter to strike a more presidential tone over the attack.

…This evil Anti-Semitic attack is an assault on humanity. It will take all of us working together to extract the poison of Anti-Semitism from our world. We must unite to conquer hate.