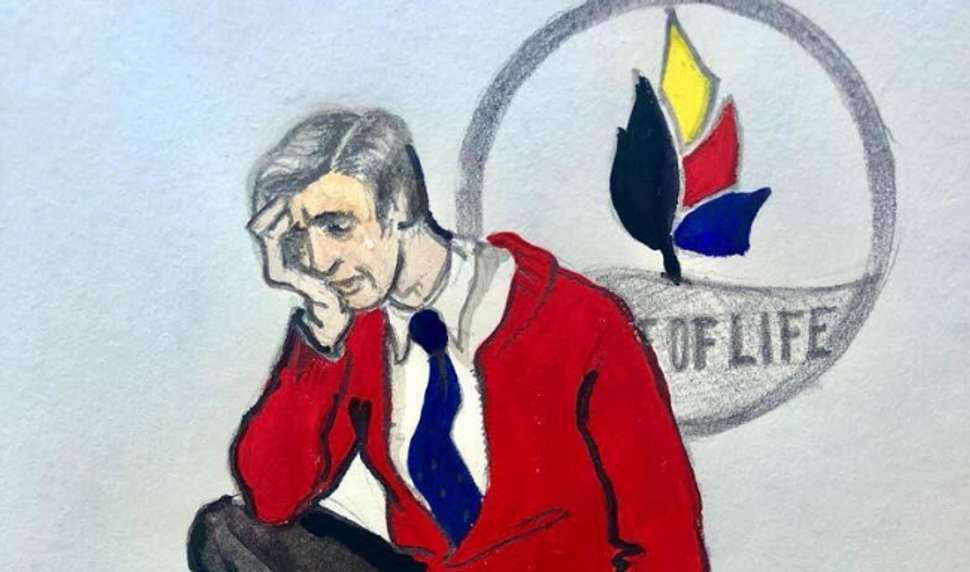 Mister Rogers was a neighbor of Pittsburgh’s Squirrel Hill, where a mass shooting took the lives of 11 at prayer in a local synagogue. With one drawing, an artist effectively summed up how he would — and many do — feel in the wake of the tragedy.

Artist Sasha Phillips drew a photo of Fred Rogers, host of “Mister Rogers’ Neighborhood,” slumped over in his seat, his face anguished. He wears his classic knit sweater, and below him is the train that would go round and round in his beloved show, which promoted peace and love. Behind him is the symbol of the synagogue, Tree of Life Congregation, with the iconic triad of colors of the Pittsburgh Steelers’s logo.

Just found this on Facebook. ???. The artist is Sasha Phillips. If she is on here, this is sadly beautiful. I imagine this is how Mr. R looks right about now. #PittburghStrong #MrRodgers #NoHate pic.twitter.com/fxa7eWtDQH

“We’re holding Squirrel Hill in our thoughts today,” The Fred Rogers Center said in a Facebook post on Saturday, the day of the shooting. “Fred Rogers lived there for many years and worked in neighboring Oakland. While we always believe in ‘looking for the helpers,’ we long for a day when there is no more tragedy born from hatred.”

Graphics have been an important part of the mourning process. The Steelers, a city staple, added a Star of David to its logo, next to the words “Stronger Than Hate.” It summed up the city’s unity with the Jewish community.