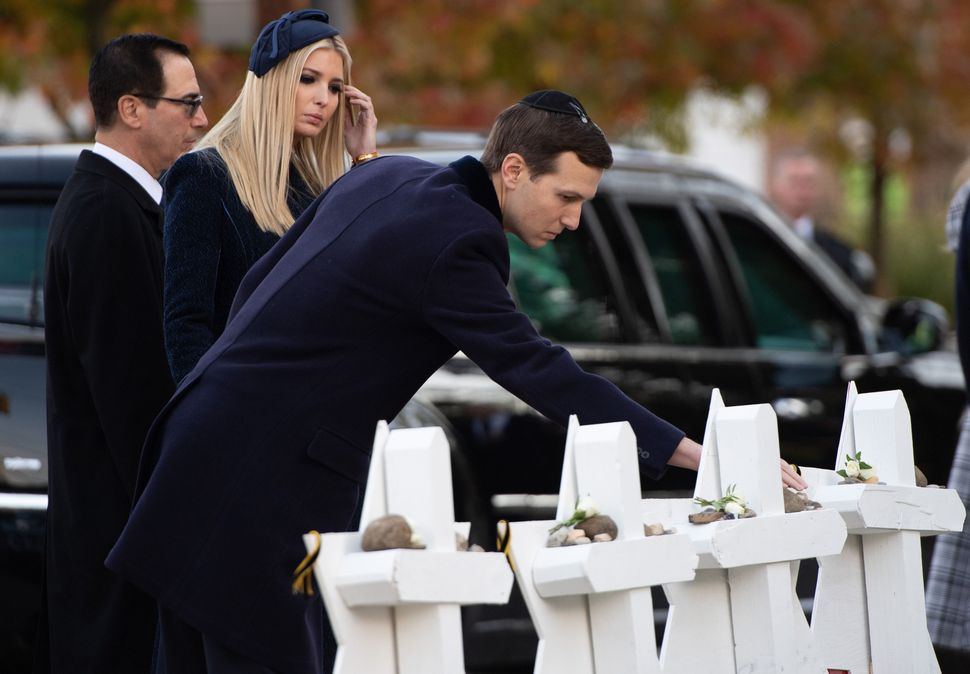 Critics of President Trump began to blame him for the massacre of 11 Jews at prayer last Shabbat as soon as the news broke, arguing that the killer had justified his actions with Trump’s anti-immigrant rhetoric.

The president’s initial response — or lack of response — to the shooting included jokes about a bad hair day and a decision to go forward with a rally. But behind the scenes, his best Jewish advisers — his daughter Ivanka and son-in-law, Jared Kushner — were figuring out how to finesse the situation.

How to pull off the standard presidential move, which would be a visit to the mourning community, when relatives of the victims and other Pittsburghers said they didn’t want him there?

1)Push him to issue a statement The couple reportedly had to ask the president to share an impassioned statement denouncing anti-Semitism. At their urging, Trump condemned the mass shooting as a “wicked act of pure evil and anti-Semitic,” according to the Wall Street Journal.

“It took the importuning of his Jewish daughter and son-in-law to craft a powerful statement of outrage at anti-Semitism after Saturday’s slaughter at a Pittsburgh synagogue,” The New York Times reported.

2) Play up his Jewish relatives “He adores Jewish Americans as part of his own family,” Sarah Huckabee Sanders, the White House press secretary, told reporters on Monday, the New York Times reported. “The president is the grandfather of several Jewish grandchildren. His daughter is a Jewish American, and his son-in-law is a descendant of Holocaust survivors.” Sanders’ voice cracked with emotion as she cited these essential family ties.

3) Implore him to fly up there Deciding that a statement wasn’t enough, Ivanka and Jared also reportedly urged Trump to make the trip to Pittsburgh. “It was their advice to go to Pittsburgh on Tuesday despite the opposition of city officials and many members of the Jewish community,” The New York Times reported.

4) Teach him some Jewish customs After spending 18 minutes in the synagogue building, President Trump and first lady Melania Trump placed stones from the White House on each of the 11 stars representing a victim of Saturday’s synagogue shooting, the Associated Press reported. Placing stones on the memorial of the deceased is a Jewish custom, because stones do not die.

5)Make him stay quiet for a little while Trump seemed respectful and solemn all day Tuesday, and he stuck to a script through his visits with the wounded victims. Protesters were right around the corner, however, shouting “Take your hate speech and leave us in peace,” about a block and a half from the Tree of Life Synagogue.

And by Wednesday morning, Trump was back to Twitter— calling the sprawling demonstrations against his visit to Pittsburgh “small” — and denouncing coverage of the visit as “disgraceful.”