Iranian Crowds Chant ‘Death To Israel,’ ‘Down With U.S.’ 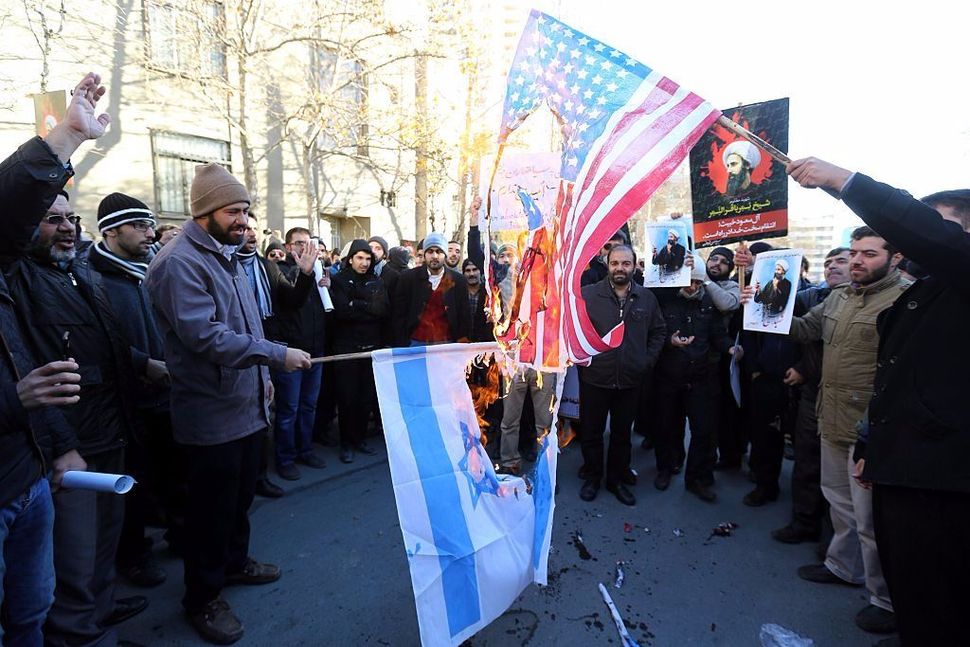 Iranian men burn Israeli and American flags during a demonstration against the execution of prominent Shiite Muslim cleric Nimr al-Nimr by Saudi authorities, on January 3, 2016, outside the Saudi embassy in Tehran. Image by ATTA KENARE/AFP/Getty Images

(JTA) — Crowds of Iranians called for “Death to Israel” and “Down to U.S.” in a rally to mark the 39th anniversary of the U.S.  Embassy in Tehran.

The rally in the capital of Tehran comes as the United States restored all sanctions that had been lifted on Iran during the era of the Iran nuclear deal. Demonstrations also were held in other Iranian cities, The Associated Press reported.

Some 52 Americans were held hostage for 444 days in Iran. Following the hostage-taking, the U.S. halted diplomatic relations with Iran.

The White House on Friday announced that “all the sanctions” relieved under the 2015 Iran deal would be reimposed, though at least eight countries — including major Iranian oil consumers India, South Korea and Japan — would get cutouts allowing them to continue purchasing Iranian oil.

“For years, I’ve been calling for sanctions to be fully reimposed against Iran’s murderous terrorist regime, which threatens the entire world. The effect of the initial sanctions is already being felt -the rial has plummeted, Iran’s economy is depressed and the results are evident. Thank you, President Trump, for this historic move. The sanctions are truly coming,” Netanyahu said.

Iranian Crowds Chant ‘Death To Israel,’ ‘Down With U.S.’