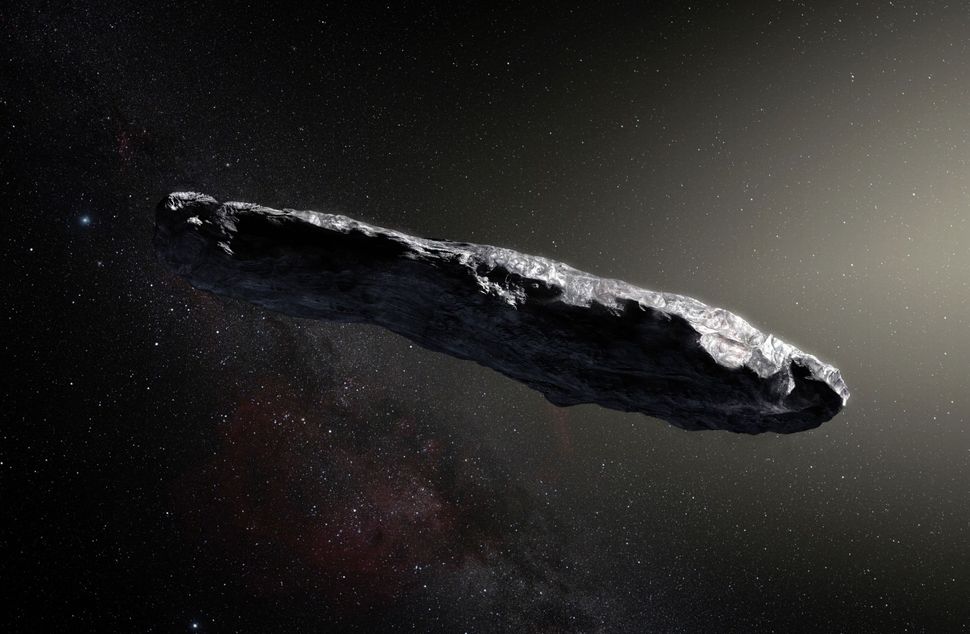 An artist’s impression of Oumuamua. Image by wikimedia

An a forthcoming paper to be published in The Astrophysical Journal Letters, Shmuel Bialy and Abraham Loeb write that Oumuamua “may be a fully operational probe sent intentionally to Earth vicinity by an alien civilization.”

Scientists have already hypothesized that the object, at approximately 700 feet long, likely came from outside the solar system. Bialy and Loeb wrote that the acceleration of the object once it flew past the sun made them think that it could be “a lightsail of artificial origin.” A lightsail is an object that travels through space powered by rays from the sun.

The pair backed up their hypothesis with a mathematical analysis of Oumuamua’s journey near the sun and other planets.

“It is impossible to guess the purpose behind Oumuamua without more data,” Loeb, chairman of Harvard’s astronomy department, told NBC in an email. He added that if Oumuamua is an artificially made object, our solar system could have run into it — he compared it to a large ship running into a buoy in the ocean.

Loeb and Bialy, a postdoctoral fellow at Harvard, acknowledge that the spaceship scenario is “exotic.” Other scientists have chimed in to say that while they appreciate the calculations behind the pair’s analysis, it is far more likely that Oumuamua is an asteroid.

For now, Oumuamua has left the solar system, and is no longer directly observable. But, Loeb says, the mere possibility that a lightsail came into our solar system warrants a larger scale study of them — if more can be found to exist.