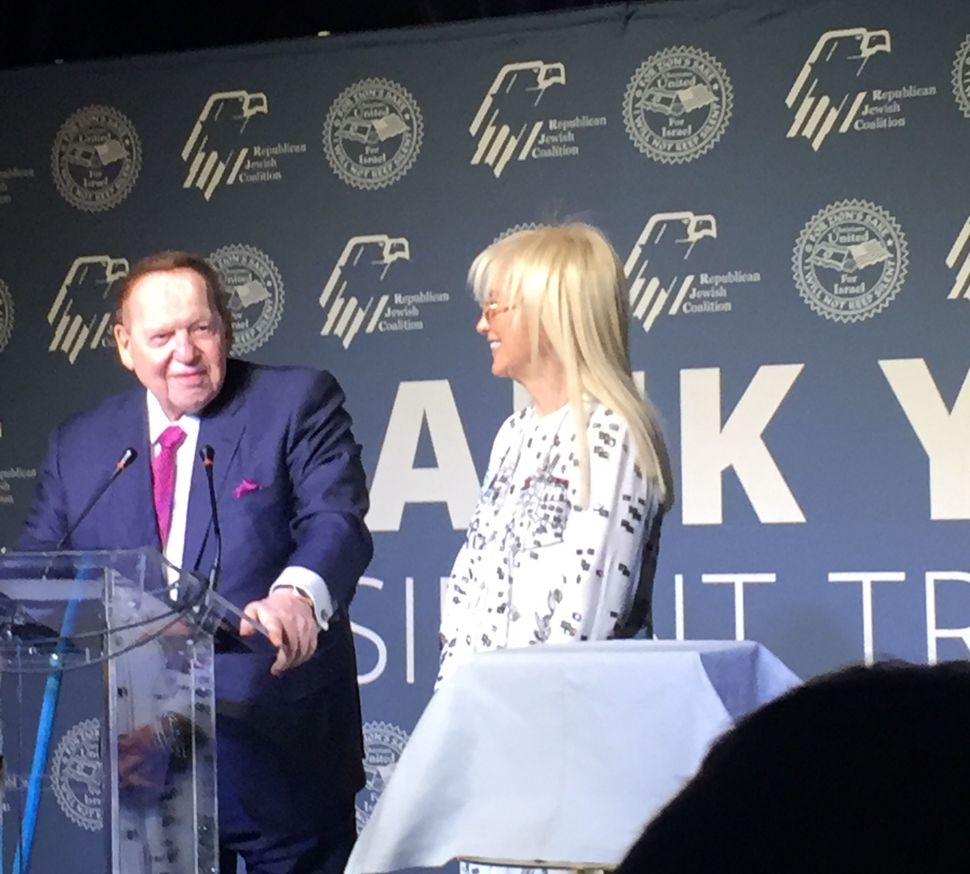 Sheldon and Miriam Adelson addressing attendees at the Republican Jewish Coalition reception after the Ceremony At The David Citadel Hotel. Image by Courtesy Cindy Grosz

(JTA) — Miriam Adelson, the wife of billionaire casino magnate Sheldon Adelson, has been named one of seven recipients of the Presidential Medal of Freedom.

The recipients were announced on Friday, and are the first to be honored by President Donald Trump.

The announcement called Miriam Adelson “a committed doctor, philanthropist and humanitarian” who has “practiced internal and emergency medicine, studied and specialized in the disease of narcotic addiction, and founded two research centers committed to fighting substance abuse.” The announcement also noted that, with her husband, she established the Adelson Medical Research Foundation, which supports research to prevent, reduce, or eliminate disabling and life-threatening illness.

“As a committed member of the American Jewish community, she has supported Jewish schools, Holocaust memorial organizations, Friends of the Israel Defense Forces, and Birthright Israel, among other causes,” the announcement also said.

The Presidential Medal of Freedom is the nation’s highest honor for a civilian.

The Adelsons poured more than $100 million into this federal election cycle, in order to keep Congress in the hands of the Republicans. But the Democrats won control of the House of Representatives after eight years. Sheldon Adelson was among the biggest givers to Trump’s presidential campaign and his inauguration. The couple was among the major donors to Republican candidates who watched the midterm election returns with Trump at the White House.

The other recipients of the medal, to be bestowed on November 16, are: Sen. Orrin Hatch, R-Utah, who is retiring after more than four decades in the Senate; Retiring Justice Alan Page of the Minnesota Supreme Court; Elvis Presley, who sold more than one billion records and, according to the White House, “defined American culture to billions of adoring fans around the world”; George Herman “Babe” Ruth Jr., who set baseball records that stood for decades; the late Supreme Court Justice Antonin Scalia; and Hall of Fame quarterback Roger Staubach.