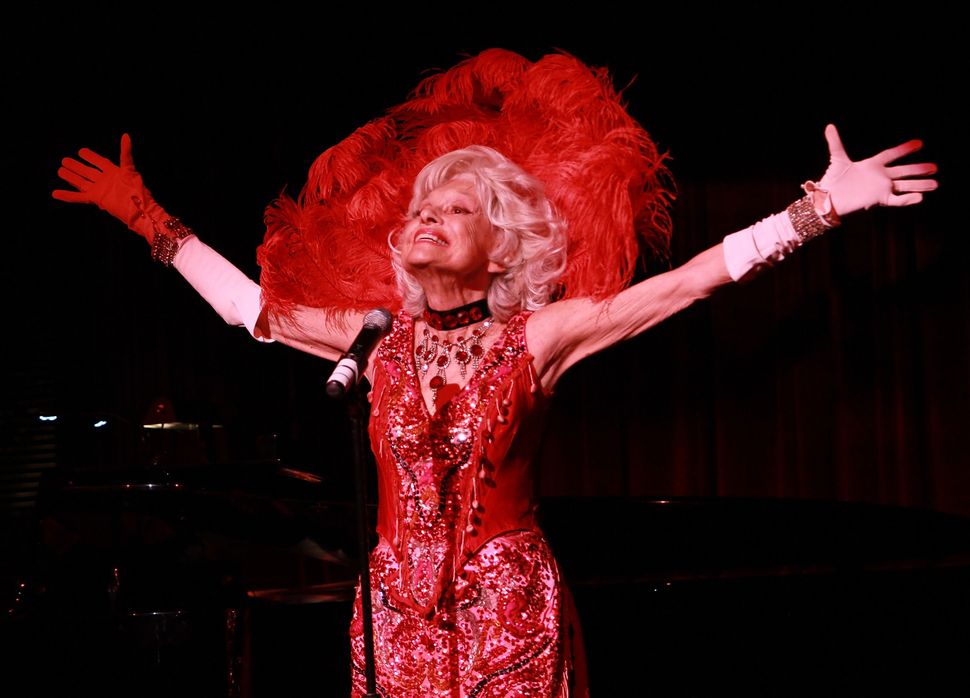 Channing, dressed in a “Hello, Dolly!” costume, at her 90th birthday celebration in 2011. Image by David Livingston/Getty Images

Carol Channing, a Broadway legend who racked up more than 5,000 lifetime performances, including 4,500 as the title character — Dolly Levi — of the musical “Hello, Dolly!” died Tuesday at her California home. She was 97. Her death came after suffering two strokes last year, the New York Times reported.

Channing was world famous for her show-stopping voice and luminous stage presence. Her life as a bona fide Broadway star began in 1949, when she sang “Diamonds Are a Girl’s Best Friend” from “Gentleman Prefer Blondes.” Of her performance, Time magazine wrote, “Perhaps once in a decade a nova explodes above the Great White Way with enough brilliance to reillumine the whole gaudy legend of show business.”

Channing lived to perform. She sang her famous “Dolly!” numbers on Broadway, at cabarets, even at her own 90th birthday celebration.

“Performing is the only excuse for my existence,” she said in 1995.

Channing was born in Seattle in 1921 to a Christian father and a Jewish mother. Channing considered herself “part Jewish.” In her memoir, “Just Lucky, I Guess,” she wrote that the phrase “Jewish theater lover” was redundant: “I mean, Jewish and theater lover are two terms of the same meaning… let’s say rabid theater lovers.” She recalled her grandfather taking her to Brighton Beach, and meeting other Russian Jewish emigres who walked on the boardwalk there.

Channing wasn’t an overnight success — after college, she made a few cracks at roles on and off Broadway in New York, and entertained at Catskills resorts, before returning to her home in San Francisco at her father’s request. She eventually landed a role in Los Angeles, in a show that eventually made it to Broadway.

Channing had four husbands, and is survived by her son from her second marriage.

Correction, 1/16/19 — Due to an editorial error, a previous version of this story stated that the titular character of “Hello, Dolly!” is Jewish. The character, Dolly Gallagher Levi, was married to a man named Ephraim Levi, of presumably Jewish heritage, but is herself of Irish (and not, so far as can be gleaned from the script, Jewish-Irish) descent.