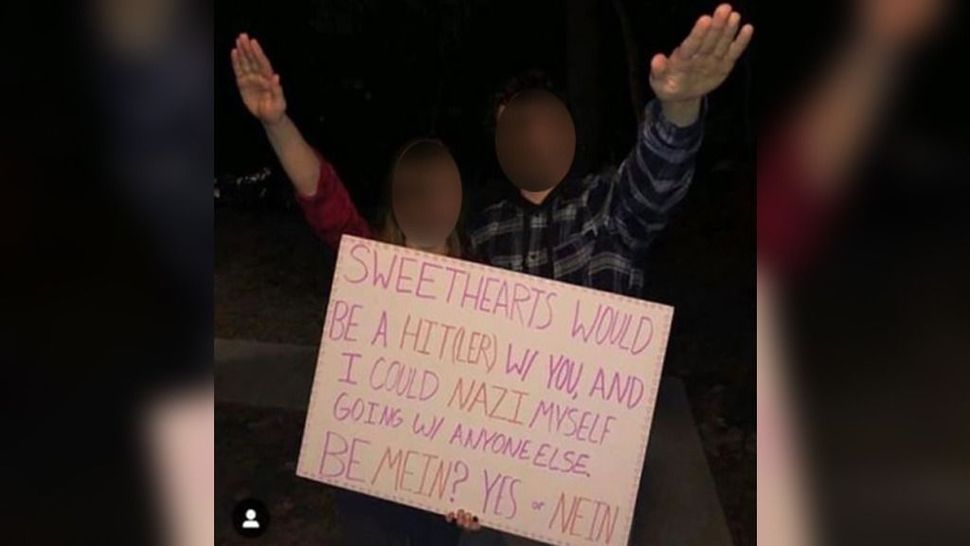 The incident shook Jewish students at Minnetonka High School in suburban Minneapolis. “They really feel uncomfortable going to school tomorrow,” Rabbi Tzvi Kupfer, the advisor to the high school’s Jewish Student Union, told local TV station WCCO. “They don’t feel safe, they feel very concerned. I think it really rips open a little bit of the feeling of safety that they have when something like this is out there.”

One of the couple posted a picture on Instagram of them doing the Nazi salute and holding a sign saying “Sweethearts would be a Hit(ler) w/you, and I could Nazi myself going w/anyone else. Be mein? Yes or nein.” The caption added: I would like to state I am not anti-Semitic in any way, I hate all races equally.”

The student has since deleted the message. In a letter to parents, school principal Jeff Erickson called the photo “deeply offensive” and said that while he could not disclose any potential consequences because of privacy laws, he said that the school “takes this matter seriously and are committed to ensuring a safe, positive environment for all students.”

The leader of the local Jewish Community Relations Council thanked the school for its response, and promised to partner with the school to work on education about the Holocaust and anti-Semitism. The JCRC arranged for a Holocaust survivor to speak to the high school last year, executive director Steve Hunegs told the local Jewish news website TC Jewfolk.

Some parents have defended the student. In a comment on a Facebook page for parents of students at the high school, one person wrote, “Kids are going to make mistakes… so did we at that age. We just didn’t have social media to contend with. They are GOOD kids!!!”

“No, these are not good kids,” another parent responded. “Good kids do not do this. My good kids (and many other good kids) are furious that this is part of their school at all.”

High school parent Jeff Schulman, whose father was a German-Jewish refugee and whose wife is the descendant of Holocaust survivors, told WCCO that his family uses their story to teach area middle schoolers about the Shoah every year.

“At least one of those students has been in one of my own presentations, and my wife’s presentations,” he said. “Given that experience, I don’t understand why anyone thought this would be acceptable.”