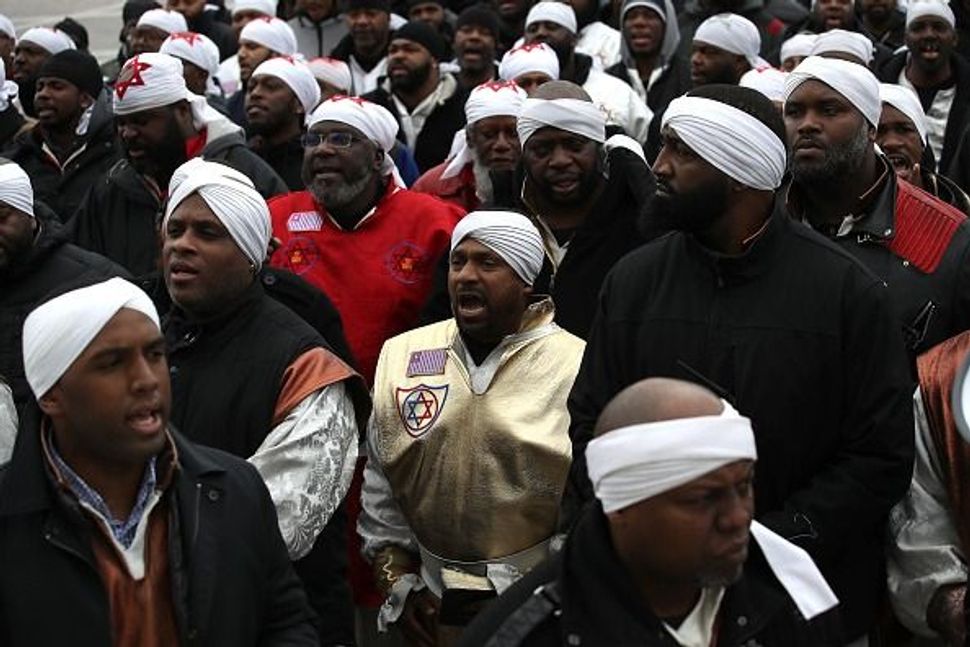 Members of the Black Hebrew Israelites demonstrate outside the U.S. Capitol on November 13, 2018 in Washington, D.C. Image by Getty Images

A group of Hebrew Israelites in Washington, D.C. was entangled in a confrontation on Friday with Native American protestors and Catholic school students visiting from Kentucky, The Washington Post reported.

A video that went viral over the weekend showed part of the entanglement, when the students wearing red Make America Great Again hats started mocking and yelling at Nathan Phillips, a Native American and Marine Corps veteran.

Five Hebrew Israelites were at the Lincoln Memorial on Friday, along with the Native American activists, for the Indigenous Peoples March.

“We were there to teach, to teach the truth of the Bible, to show them our real history,” Shar Yaqataz Banyamyan told the Post.

Hebrew Israelites are people of color, mostly African Americans, who believe they are the descendants of biblical Israelites. They typically believe that Native Americans, Latinos and other minorities are also members of different biblical tribes, and that today’s Jewish community is comprised of impostors who aren’t descended from biblical figures. (For more information, read the Forward’s explainer here.)

Videos show the Hebrew Israelites exchanging insults with the Kentucky schoolboys, who were there for the pro-life March for Life.

“Tell them to come over in the lion’s den instead of mocking from over there,” Banyamyan can be heard saying in the video. “Y’all dirty ass little crackers, your day is coming.”

They also taunted the Native Americans, arguing that the word “Indian” means “savage.”

Ephraim Israel, another Hebrew Israelite who was present, told the Post that tensions flared when the students started making fun of them.

“They were sitting there, mocking me as I was trying to teach my brothers, so yes the attention turned to them,” Israel said. “I explained to them, you want to build the wall for Mexicans and other indigenous people, but you’ve never seen a black or a Mexican shoot up a school.”

Phillips, a member of the Omaha tribe, said he blamed both the students and the Hebrew Israelites for the mob-like scene.

Correction, January 21, 8:45 p.m. An earlier version of this story used a photo from a 2016 article. None the men were involved in this situation.