Why Are Democrats Accusing Ilhan Omar — One Of Their Own — Of Anti-Semitism? 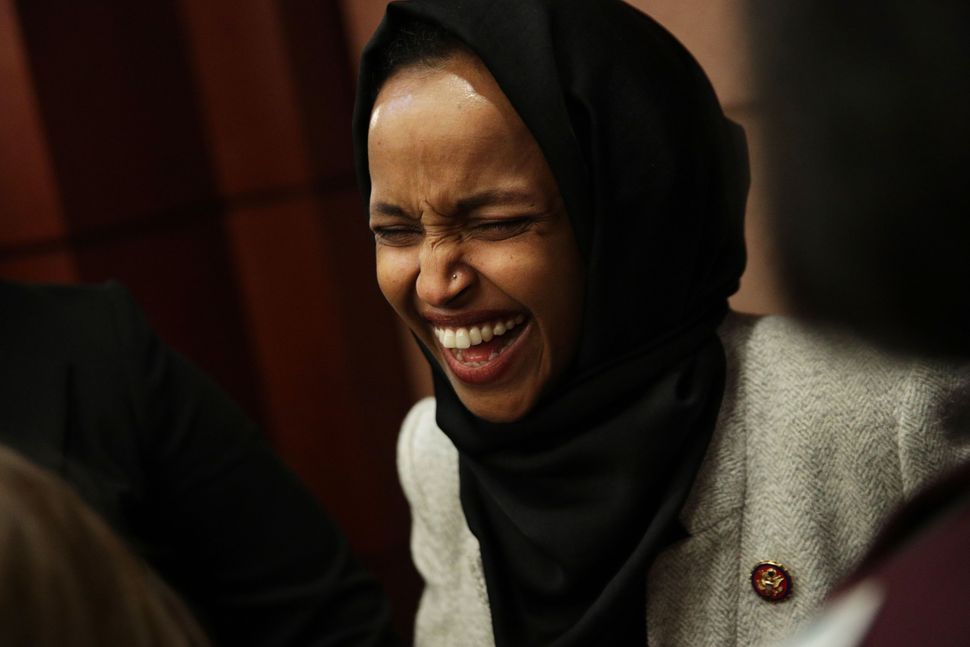 Democratic leaders in the House are planning to introduce a resolution on Wednesday criticizing recent statements by Ilhan Omar, a Democratic congresswoman from Minnesota, Politico reported Monday.

So why are House Democrats going after one of their own?

Since early February, Omar has been at the center of a series of overlapping controversies, each hinging on whether the way she talks about the pro-Israel lobby’s influence in Washington is anti-Semitic.

It’s a debate that’s exploded from Jews in her own district, to Jewish circles of the internet, to the national stage.

In the meantime, Omar herself has been targeted with bigoted attacks, once in the West Virginia statehouse last week, and then again with threatening graffiti calling for her assassination.

Omar, who is Somali-American, is one of the first two Muslim women ever elected to the U.S. Congress, and the first to wear the hijab.

The criticisms of Omar first drew national attention on February 10, when she referenced a 1997 Puff Daddy song in a now-deleted tweet that implied that someone was paying members of Congress to condemn her for criticizing Israel. Later, when asked by Forward opinion editor Batya Ungar-Sargon who was making those payments, she wrote, “AIPAC!”

Of course, it’s true that AIPAC, the powerful pro-Israel advocacy group, works to build support for Israel in Washington and around the country. But critics contended that the way Omar phrased her analysis played into long-standing anti-Semitic stereotypes about Jews using money to control events in a way that benefits them. The tweets set off a cycle of criticism of Omar that included both liberal and right-wing voices. Omar apologized for the tweets a day later. But last week, during a panel discussion at a Washington, D.C. bookstore, she set off the outrage cycle again.

“I want to talk about the political influence in this country that says it is O.K. for people to push for allegiance to a foreign country,” Omar said, according to a New York Times report, referring to Israel.

This time, she didn’t back down. In a Twitter thread on Sunday, in response to criticism from Congresswoman Nita Lowey, Omar wrote: “Our democracy is built on debate, Congresswoman! I should not be expected to have allegiance/pledge support to a foreign country in order to serve my country in Congress or serve on committee.”

Critics charged Omar with accusing Jews of dual loyalty, a central facet of historical anti-Semitism, which claims that Jews are insufficiently loyal to their home countries.

“Accusing Jews of having allegiance to a foreign government has long been a vile anti-Semitic slur that has been used to harass, marginalize, and persecute the Jewish people for centuries,” Anti-Defamation League national president Jonathan Greenblatt wrote in a letter to House Speaker Nancy Pelosi asking for a resolution condemning Omar.

Yet the response to Omar has torn the Jewish community. While many groups on the Jewish left welcomed Omar’s initial apology, some have condemned the pile-on. In a statement Monday afternoon, the leftist Jewish activist group IfNotNow criticized the reported House resolution. “The fact Speaker Pelosi and the Democratic leadership are putting forward a resolution on the floor to condemn Rep. Ilhan Omar rather than coming together to condemn the white nationalists calling her a terrorist and threatening her life is a damning indictment of their priorities,” the group said. “They care more about intimidating their own members and progressives away from speaking out against unjust Israeli policy than combatting the greatest threat to this country’s future: the rise of white nationalism.”

And while some attacks on Omar have been limited to her use of anti-Semitic tropes, it’s clear that others are focused on her criticism of Israeli policies. In a tweet on Monday, a California Democrat, Juan Vargas, wrote: “It is disturbing that Rep. Omar continues to perpetuate hurtful anti-Semitic stereotypes that misrepresent our Jewish community. Additionally, questioning support for the U.S.-Israel relationship is unacceptable.”

The House is expected to vote on the resolution on Wednesday. The text is unavailable.

Why Are Democrats Accusing Ilhan Omar — One Of Their Own — Of Anti-Semitism?